Looking back at the Dow, we can see how the U.S. economy has changed.

Responsibility was clearly allocated among the firm’s principals. Charles Bergstresser opened the office and reported the previous day’s late news in the first bulletin. Jones ran the office during the day and later listened for gossip at the Windsor Hotel Bar on Fifth Avenue. And Dow was the writer who recorded the lengthier company analyses, stock market news, and gossip. Meanwhile, all three sought new clients.

Dow Jones news bulletins were continuously delivered during every business day by six or seven fourteen-to-sixteen-year-olds. With Eddie Jones calling out “Boys! Boys!” when it was time for a delivery or someone shouting “Earnings” as the financial data arrived, the day unfolded.

Starting in 1884, they also began to publish average closing prices for a group of representative stocks. Since Dow chose the securities that reflected market trends, his 1894 average included nine railroads and two industrial corporations. Soon after, the first Dow Jones Industrial Average was published on May 26, 1896 with 12 component companies. In 1916, it expanded to 20 and then 30, where it now is, in 1928:

Fast forwarding through 125 years, you can see the changes. This graphic illustrates 200 years of stock market sectors. The transports especially have become less dominant: 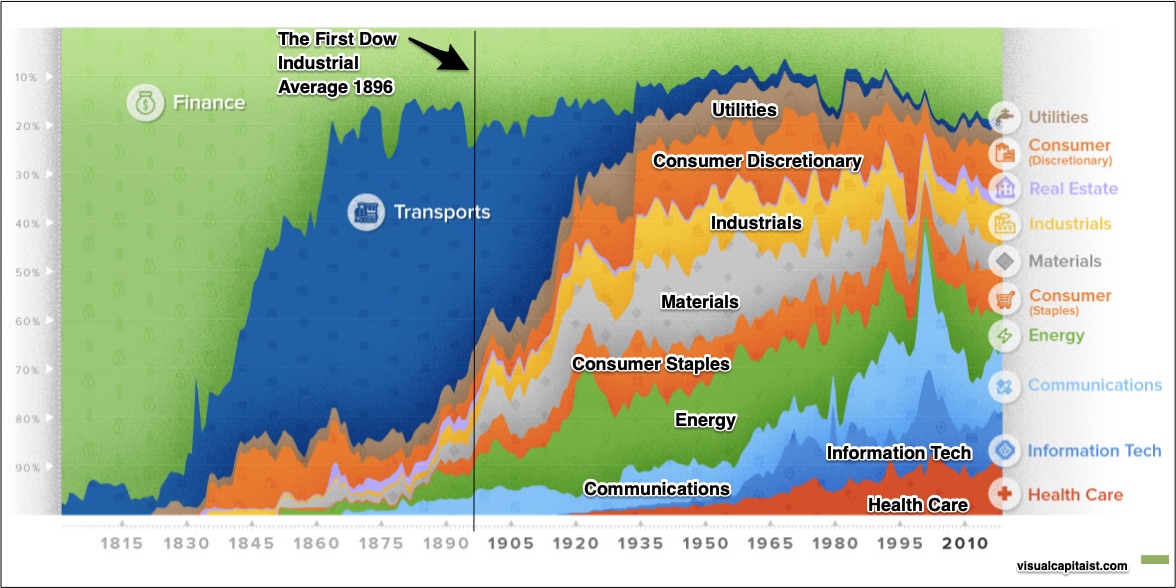 We would have seen the first stock markets in the United States on Wall Street. During the 1790s, traders gathered outside and in coffee houses to buy and sell government bonds. Then and now, stock markets help businesses raise money when they sell shares to the public. They create liquidity for investors who want to trade stocks and bonds. And through securities markets, governments can fund a debt.

Returning to where we began, we can say Happy Birthday to the Dow Industrial Average and thank it for conveying the information that stock market participants needed to know.

My sources and more: In addition to a past econlife post (that I’ve excerpted), WSJ told more about the birthday. And then, as always, the Visual Capitalist is handy for graphics.

An Epic Disagreement Between Apple and Fortnite