What If Cash Handouts Have No Strings Attached?

In a new March 2021 report, we found out the results for the first year of Stockton’s UBI experiment. Recently too, the impact of Rwanda’s cash distribution was in the news.

Last year we looked at Rwanda and Stockton. Today, we can do the follow-up.

Concerned about Rwanda’s youth underemployment, researchers designed an experiment in which participants received job training or cash handouts. The job training group received 30 weeks of instruction. Meanwhile, the cash recipients got the equivalent or more of the cost of the training program.

In a 2020 report, the results indicate that there was no definitive difference in employment rates between the two groups. However, within the cash-only cohort, there was more evidence of entrepreneurism, well-being, and productivity. Measured by the value of livestock and physical capital like machinery and equipment, their assets were worth more as was their savings. The one area where the training group exceeded the cash recipients was business knowledge.

Funded privately by non-profit organizations, unconditional cash transfers were given to 125 residents of Stockton, California who were 18 or older. Each participant, who had to come from a neighborhood with a median income at or below $46,033, received a prepaid $500 debit card on or near the 15th of each month.

In the experiment and the control group, there were more women than men, more renters than homeowners, and the majority were unmarried: 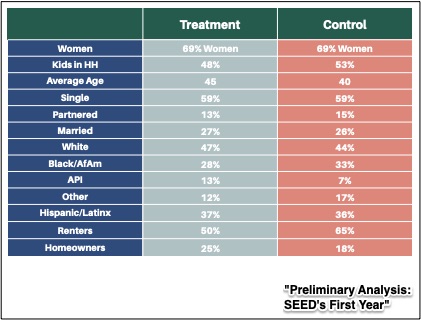 You can see below that SEED recipients spent more than half of their money on food, merchandise, and utilities. At approximately three percent or less, self-care and recreation were close to the bottom of the list: 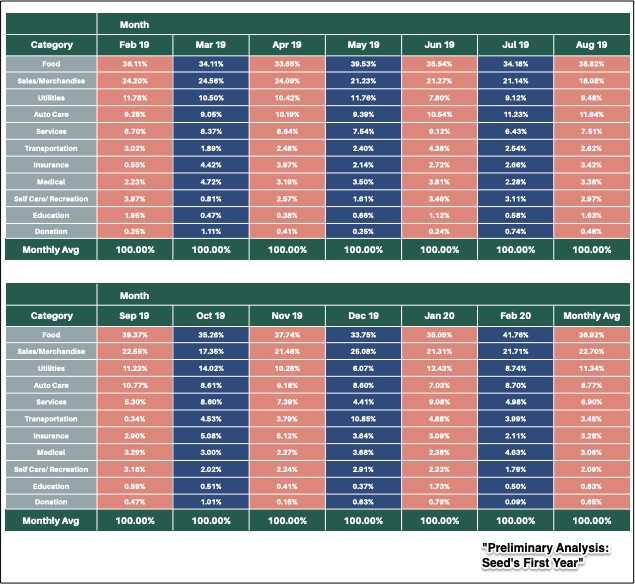 Anecdotal evidence indicated that diminished anxiety over finances strengthened family relationships. Because participants worried less about food insecurity, they could enjoy everyday pleasures like watching a movie, reading a book, or writing poetry. They were able to catch up with dental care and cover unexpected expenses.

The quantified results included a jump from 28 percent (in 2019) to 40 percent (in 2020) of the recipients having full time employment. They also cited less income volatility, enhanced wellbeing, and more willingness to take risks and set goals.

Although the results of UBI experiments have been positive, many of us tend to reject UBI initiatives. In a 2016 Swiss referendum, 77 percent said no to an unconditional 2500 Swiss franc monthly payment for adults and SFr625 for each child. Meanwhile, after a two-year trial with 2,000 unemployed participants, Finland ended its €560 a month UBI.

In the U.S., Pew Research asked survey recipients if they approved of a $1,000 (or so) UBI to all U.S. adults. While 54 percent opposed the concept, younger people were far more supportive: 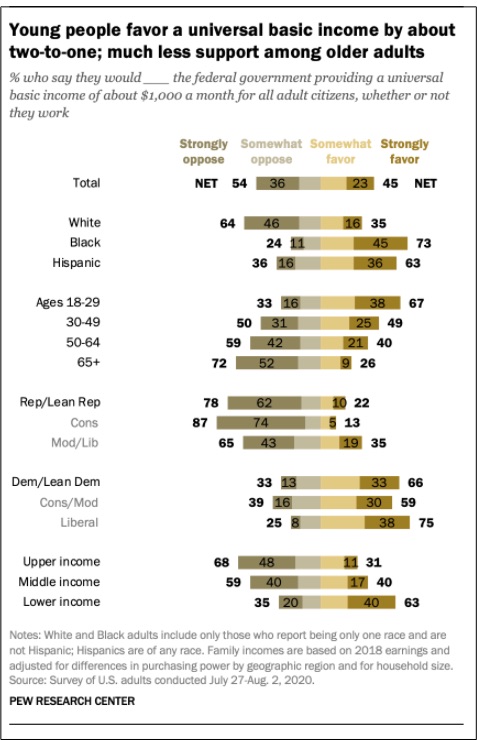 As economists, we can say that the universal basic income is redistribution. Like taxes, the UBI transfers what one group has earned to others.

So yes, we are rather used to redistribution. And experiments demonstrate the benefits that UBI can create. But still, many oppose it.

My sources and more: It’s always delightful when the topics of disparate articles converge. It happened this week with the updates on Rwanda and Stockton and then the bigger picture from Pew. Complementing the reports, the BBC described the Swiss UBI rejection as did DW for Finland. And finally to read much more about the Rwanda study, do take a look at this paper.

How Zero-Emissions Will Change Jobs