How Do the Economy and Democracy Need Each Other?

The 2019 Democracy Index places 167 nations in four buckets. Below, the dark and medium green indicate “full democracies” while the lighter green identifies the “flawed democracies.” Then, moving downward, the regimes are grouped as “hybrid” and “authoritarian”: 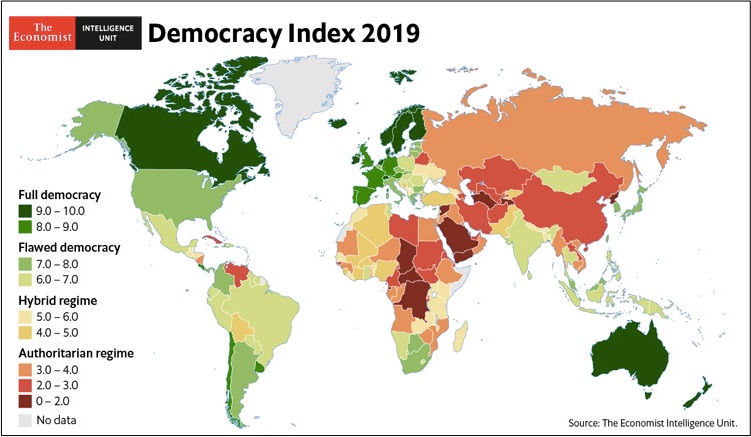 According to The Economist Intelligence Unit (EIU), in 2016, the U.S. was “demoted” from a full democracy to a “flawed democracy.”

The Economy and Democracy

The EIU Democracy Index includes 167 countries. However, just 22 with 5.7 percent of the world’s population have “full democracies.” At the other extreme, 35.6 percent of the people in the world live in the 54 “authoritarian regimes.”

To calculate the index, the EIU used five political categories and 60 subcategories. Basically, they gave each of the five categories a 0 to 10 score that were averaged together to get the overall rank.

In two ways they displayed the connection between the economy and democracy. In their political participation and culture categories, they asked about the power of economic groups and also if democracy positively impacted the economic system. Then they explained that economic distress alone is not enough to create democratic unrest. Problems like income inequality will have more of an impact when paired with a lack of trust. In the U.S. trust in the U.S. Congress decreased from a 40 percent approval rate to 21 percent between 2000 and 2019.

The 22 “full democracies” are primarily OECD countries from the developed world. Next, in addition to the U.S. (#25), examples of “flawed democracies” range from Israel (#28) to Italy (#35) and India (#51). China is “hybrid” at #153. And finally, at the bottom of the “authoritarian” list are Central African Republic, Democratic Republic of Congo, and North Korea.

In an April 2019 “Fact Tank,” Pew Research looked at the connection between economic conditions and democracy. They concluded that people become dissatisfied with democracy when their view of the economy is pessimistic: 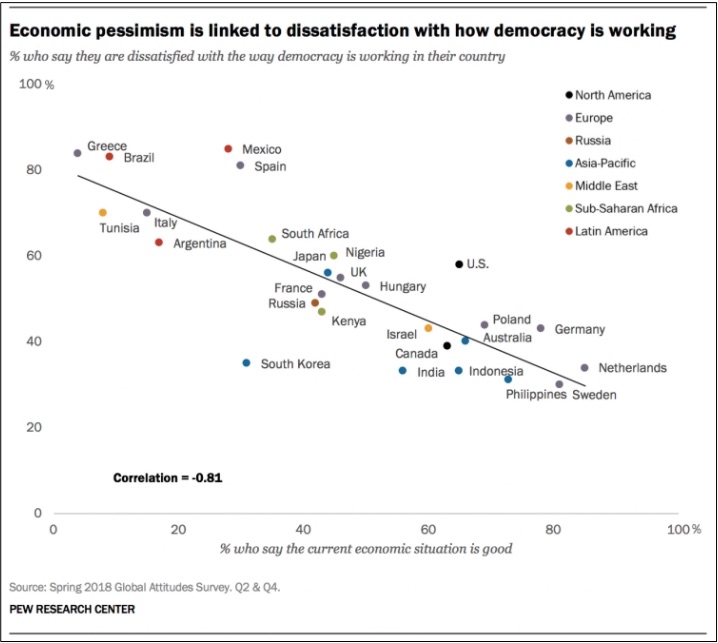 Their second connection between democracy and the economy related to the average person’s economic situation. If average individuals were faring well, then their opinion of democracy was higher: 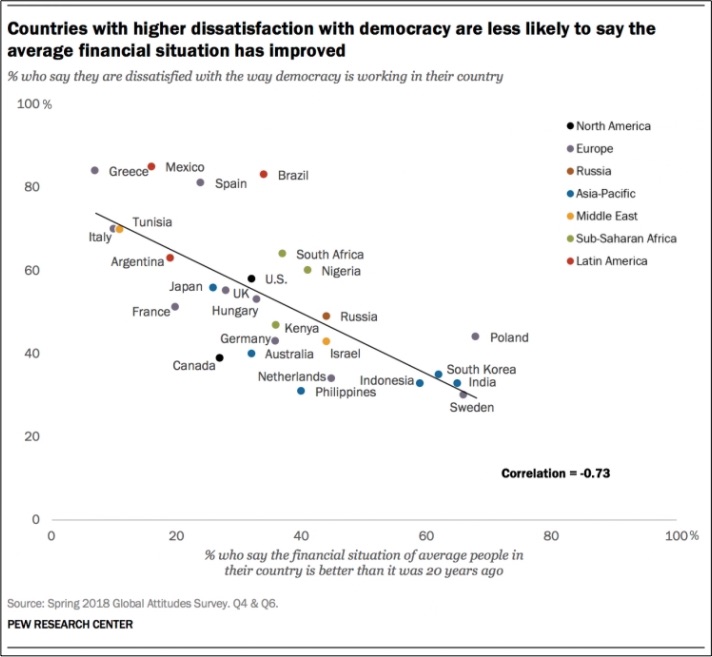 As economists, we can always return to tradeoffs. In Equality and Efficiency The Big Tradeoff, economist Arthur Okun explained that we have a tension between the economy and democracy. While a competitive market creates inequality, our democracy requires the opposite. Now we can add that they also need each other.

My sources and more: The Democracy Index from The Economist had an economic dimension that Pew Research expanded.

Our Weekly Economic News Roundup: From the Superrich to a Pistachio Nut