Six years ago, TV news person Chuck Todd suggested our political divide was really the difference between Starbucks and Chick-fil-A.

Fact checkers then looked at restaurant locators and found that close to 50 percent of all Chick-fil-A’s were located in counties carried by Barack Obama. Meanwhile, Starbucks is almost everywhere, even in Utah County, Utah where Mitt Romney got 88 percent of the vote.

Still though, the retail theory has possibilities. Where you shop can say how you vote. 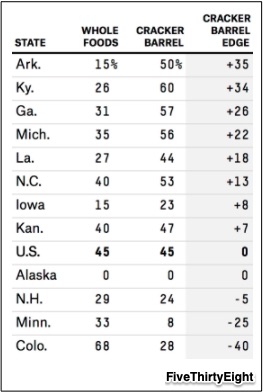 In addition to Cracker Barrel, Republican gains were correlated with voters living within 10 miles of a Tractor Supply Company, Hobby Lobby, or a Bass Pro Shop. The NY Times called it a down-home zone:

Perhaps creating some alarm for those of us with Democratic tendencies, just 34 percent of all U.S. voters live in upmarket bubbles that are within 5 miles of Whole Foods, Lululemon, or an Apple Store:

So yes, we have certain stores that cluster near people with like political proclivities. And, liberals and conservatives could have different shopping preferences.

Where does this leave us? As economists we can always default to the tradeoffs required by every decision. In past elections I would have said the choice was between  organic juice blends and homemade chicken n’ dumplings.

But today, it is about so much more. Please be sure to vote.

My sources and more: Today’s post originated with a University of Pennsylvania Law School talk from TV commentator Michael Smirconish. When he mentioned Whole Foods and Cracker Barrel, I had to investigate. My first stop was fivethirtyeight and Medium with the 2016 stats. I also wound up at Pew Research and this old econlife post on Starbucks and McDonald’s. But, if you read just one article, the perfect summary is here.

The Red and Blue States That Select the Same Halloween Candy