Why Potty Parity Is About Much More Than the Bathroom

Until now, single sex multi-use restrooms were a building code requirement. However, the IBC (International Building Code) has been modified. In 2021, their guidelines will say that bathroom design can be gender neutral.

A future non-gender public restroom could have floor to ceiling doors and common-use sinks: 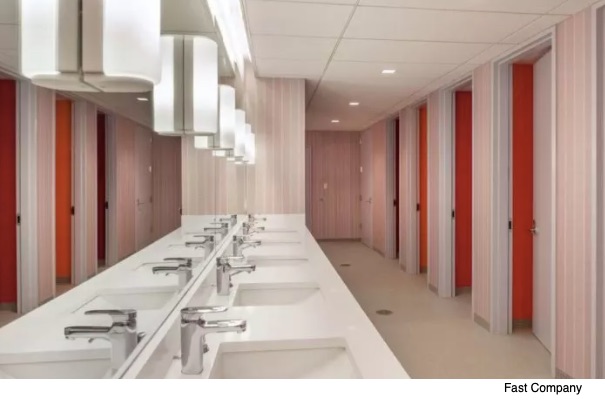 This design change takes us beyond aesthetics to inclusion and power in public spaces.

For centuries, the bathroom has been the scene of equity battles.

Although women had been in the U.S. House of Representatives since 1917, it took 94 years for us to get a nearby restroom. Until then Congresswomen missed votes because of a five-minute race to a bathroom. Meanwhile, the men have always had one that was next to the House floor.

In the movie Hidden Figures, we see the indignities experienced by female Black scientists during the 1960s in Virginia. Although their brains were crucial for the success of NASA’s space program, they still had to do a half-mile sprint to the “colored ladies room.”

Similarly, transgender people are excluded from public restrooms. In a 99% Invisible podcast, we meet Sandy. Nonbinary and transgender, Sandy looks neither male nor female. Consequently, ladies and men’s bathrooms are unpleasant and risky places.

We could say that potty history is about excluding the powerless from public spaces. The historical lineup starts when more women began to work during the 19th century and in Congress. It continues with African Americans and people with disabilities. And now, the LGBTQ battle is being fought.

I wonder though whether we are really talking about economic power and how architecture is about more than aesthetics.

My sources and more: This 99 percent invisible podcast focuses on transgender bathroom access. Next, for some history, I returned to female members of Congress, a    New Yorker article on Hidden Figures and to Fast Company. Then, Architectural Digest was ideal for the design perspective. Read together, the articles illustrate the significance of potty parity.

Our featured image is from the Whitney Museum of American Art in NYC.