On August 22, an All Nippon Airways (ANA) jumbo Airbus A380; flew 334 passengers from Narita Airport to nowhere. But really it was somewhere and back. Including pineapple juice and mojita drinks, videos, and a raffle, the 90-minute flight was a Hawaiian-themed round trip. (Of course the ground staff all wore Hawaii-related shirts. I am not sure about the pilot.)

Seats were distributed through a lottery that attracted 150 times availability. Because of Covid-19, only 334 could be on board although the plane’s capacity was 540.

These are two happy passengers: 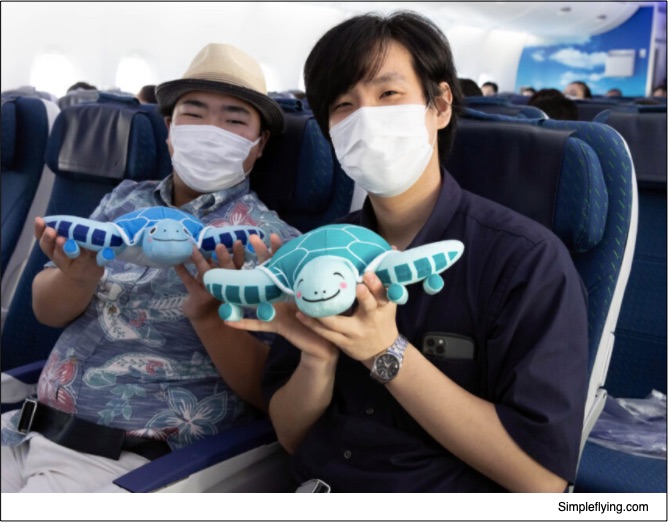 During the pandemic, jumbo jets are coming in handy. Otherwise, they are on the way out.

Demise of the Jumbo Jet

When you think jumbo, the Boeing 747 first comes to mind. Because of its size, the million pound (or so) jet occupied a luxury slot that gave space to those who could afford it, From the beginning, the passenger version of the 747 had an upper deck with a lounge and a piano. A person who flew on the first Pan American flight in 1970 said, “It was like entering a theater.” But also, fully occupied with more than 500 fliers, a 747 flight could offer cheap fares. In addition, the plane’s elevated cockpit made loading cargo easier when it flew as a freighter.

For luxury and cheap fares, the 747 seemed optimal until reality set in. Most markets did not need the huge planes. So Boeing has announced the end of production for its jumbo jets. Their deliveries will stop with a 2022 order for 15 freighters. The last 747 passenger jet was delivered in 2017.

Similarly, the less successful Airbus A380 will retire. Much younger than Boeing’s 747, the A380 first flew in 2007 for Singapore Airlines, Since Airbus had expected to sell more than 1200 jets and thus far they’ve delivered 242, you can understand why they too will downsize.

Our Bottom Line: The Transportation Infrastructure

Moving from 18th century roads to 19th century canals and railroads to a 20th century addition of air travel, the growth of our transportation infrastructure has played a crucial role in our economic development.

The one exception? Ideal for flying with empty middle seats, jumbo jets are still handy for those flights to nowhere.

My sources and more: Hearing from Reuters about the airlines that were flying nowhere, I investigated further and discovered this ANA flight and the link to the jumbo jet problem at WSJ and FT. Lastly, you might enjoy (as did I) this Ryanair podcast. It covers the airline’s history and its response to the pandemic.

Our featured image is from simpleflying.com.