Why One-Size-Fits-All Never Does

Designed as “one-size-fits-all,” pianos are supposed to be gender-neutral. They assume that a typical hand will comfortably span a 7.4 inch octave. And yes, most men can. But that’s the problem. The average female handspan is seven to eight inches. For men, it’s closer to 9 inches.

xkcd had this perspective: 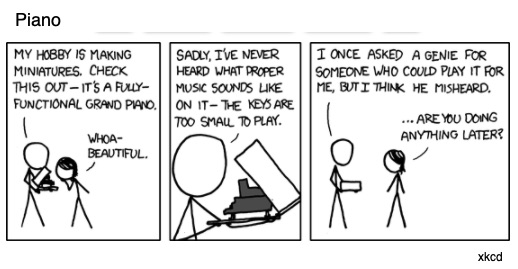 Where are we going? To the male bias in items designed for all of us.

One Size Fits All?

Somewhat like the piano, Google’s voice recognition works best for people who are male. Still though, Adobe estimates that 48 percent of all “general website searches” are voice based. A 2019 HBR article gave accuracy rate grades for Google voice recognition:

At the office, while temperature settings are also “one-size-fits-all,” the numbers getting plugged in are based on male metabolic rates, male clothing, and male weight. As a result, we wind up with a gender biased temperature of 72 degrees Fahrenheit. Most women, though, like it closer to 77. One reason for the gap could be that the muscles that men have more of give off more heat.

All too often, the people who assume “one-size-fits-all” have been men with a male bias. Consequently, a piano keyboard suits larger hands. Similarly, creators of voice recognition software use white male databases with fewer higher-pitched voices. And whether selecting a temperature for the office or a crash testing dummy in an auto lab, all too often, the standard has been the average male.

I would ask here whether we are really talking about diminished female productivity. Economists define productivity as the fraction through which we compare output of goods and services to input from labor and capital. The goal? More output from less input.

And yet, even at the piano, most women need to work harder as did Ginger Rogers who pointed out that she did all that Fred Astaire did. Only she did it backwards, in a dress and heels.

Do take a look. Seeing them dance is such a pleasure:

My sources and more: Invisible Women focuses on the facts that illustrate gender data bias. A good starting point, the book (Chapter 8) then took me to an HBR article, this paper. and this look at the 7/8 keyboard. From there, for office temperatures, NPR had the overview and here are voice use survey results.

What Happens When Landlords Don't Receive the Rent