Deciding What We Mean By Socialism

Yesterday, I randomly asked people what they meant by socialism. Most were not sure.

In a Hill HarrisX survey, 20 percent could not define socialism. People had a gut reaction. They felt something positive or negative. But only 13 percent had an accurate definition that related to government ownership of the parts of the economy. Others had a fuzzier understanding:

Age mattered. If you were 34 and less, you tended toward a more positive view of socialism. Younger people said socialism ended poverty and provided basic needs like healthcare. At the same time, an older cohort believed socialism abolished private property and constricted individual liberty. Also, there was a divide for education. College grads were more likely to accurately say what socialism meant.

You can see that age matters: 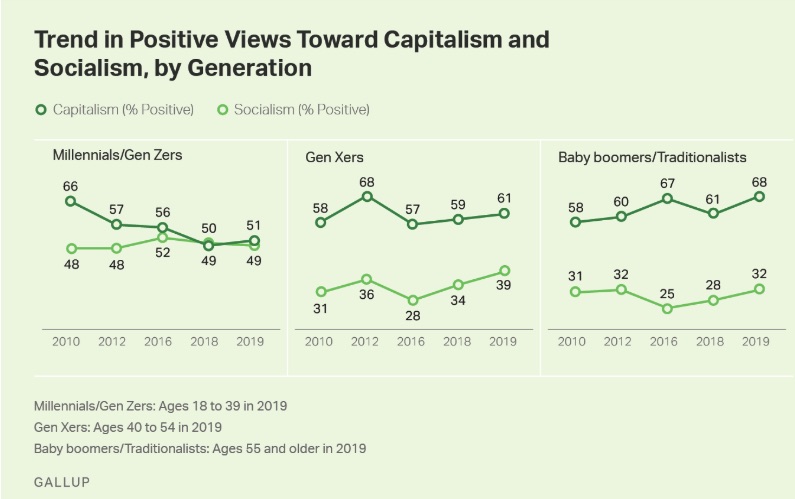 Seeing a shift away from capitalism, I suggest we replace “democracy” with “capitalism” in this Winston Churchill quote: “Indeed, it has been said that democracy is the worst form of Government except all those other forms that have been tried from time to time.”

Economists like to tell us that there are three basic ways in which we produce and distribute our goods and services. A traditionalist approach says that the past determines the future. The children in a family will select their parents’ roles and occupations. A second possibility is command. Then, central planning from one person or group determines how we answer the basic economic questions: “what, how, and to whom.” The third possibility is a market. Coming from the bottom up. each of us decides what we want and need, and businesses respond.

My sources and more: After randomly asking people what socialism meant and getting a “we don’t know” response, I checked the surveys. That took me to The Hill and Gallup. I also returned to the ideal discussion of socialism in this econlib article from Robert Heilbroner. A socialist, he writes so beautifully.

What An Economist Says on Valentine's Day