How Hershey Kisses and COPEC Are Like Oil and OPEC

Ghana’s vice president called it COPEC. He was referring to a chocolate version of OPEC.

Although both are cartels, they are not quite the same.

Last summer, West Africa’s Ghana and the Ivory Coast said they would elevate cocoa bean prices. But instead of controlling supply like OPEC, they are going to increase the price. For every metric ton, the benchmark futures price will get an extra $400 added to it.

The Ivory Coast and Ghana produce more than 60 percent of the world’s cocoa. Far behind, at #3, is Ecuador: 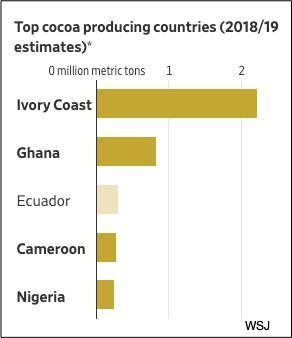 In a typical cocoa supply chain, the beans go from small farmers who earn less than $3 a day to local middlemen who pool the crop. The next step is the government and then the processors that sell it to the chocolate makers we all know. Since the government sets the price paid to the farmers, it will be able to give them more.

Some worry though that the cocoa bean price hike could have unintended consequences. As economists we know that higher prices hike supply and also shrink demand. Combined, more quantity supplied and less demanded mean unsold surpluses. In addition, traders could look for alternate sources, children could be taken out of school to help their families expand production, and forests could be cleared.

Higher cocoa price futures will create new incentives. You can see that they have sunk since their 2015/2016 highs: 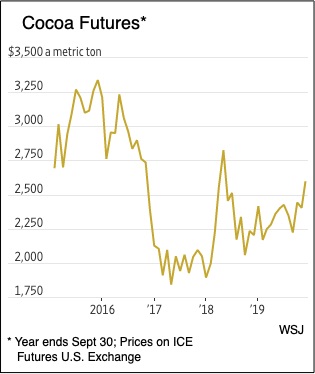 “People of the same trade seldom meet together, even for merriment and diversion, but the conversation ends in a conspiracy against the public, or in some contrivance to raise prices.” Adam Smith

A cartel is an association among the providers of a good or service that typically establishes a common price and other forms of cooperation. Contemporary cartels include OPEC’s 14 countries (Organization of Petroleum Exporting Countries) and the Federation of Quebec Maple Syrup Producers. Composed of just two countries, COPEC is a rather tiny cartel.

During the 19th century, rival U.S. railroads with parallel track found that cooperation was the one way to eliminate ruinous competition. We had for example, the Acheson, Topeka and Santa Fe, the Union Pacific, and the Missouri Pacific Railroad all with the same customers. Rather than compete, the better solution (for them) was a cartel that gave them monopoly power.

If the cocoa cartel’s monopoly power works, then we will be paying more for our Hershey Kisses, Mars Snickers Bars, and Mondelez’s Oreos.

My sources and more: In an exceedingly long article, WSJ had the complete story of cocoa beans prices as did Bloomberg and FT. Then, for a slightly different perspective, FT told about typical cocoa farmers. And finally, for some cartel history, you might go to this article from a Stanford historian or this paper.

Most of Our Bottom Line was in a past econlife post.

How Eating Less Popcorn Is Like Smoking Fewer Cigarettes