The Spread of the Avocado

Hospital emergency rooms are treating an increasing number of cases of Avocado Hand. A malady that can surface before the Super Bowl, Avocado Hand strikes during guacamole preparation when the knife mis-hits the pit.

Statistics indicate that the most Avocado Hand cases occur from April to July. According to one study, there have been 50,413 cases from 1998 to 2017. Happening more frequently, on a Saturday or Sunday, they usually  affect the left hand of a female, aged 23 to 39. But most importantly for where we are going, the incidence increased as avocado consumption went up. Between 1998 and 2002, there were 3,143 Avocado Hand cases. The number soared to 27,059 between 2013 and 2017.

You can see that we are eating more avocados: 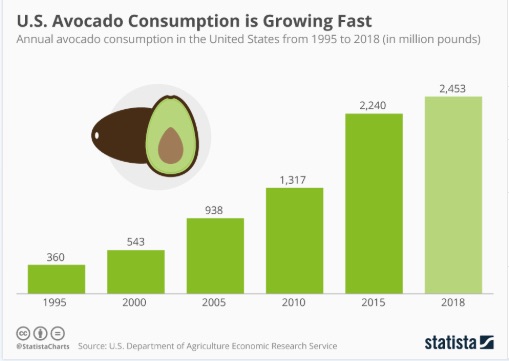 According to the Hass Avocado Board (2018), we bought the most avocados for New Year’s: 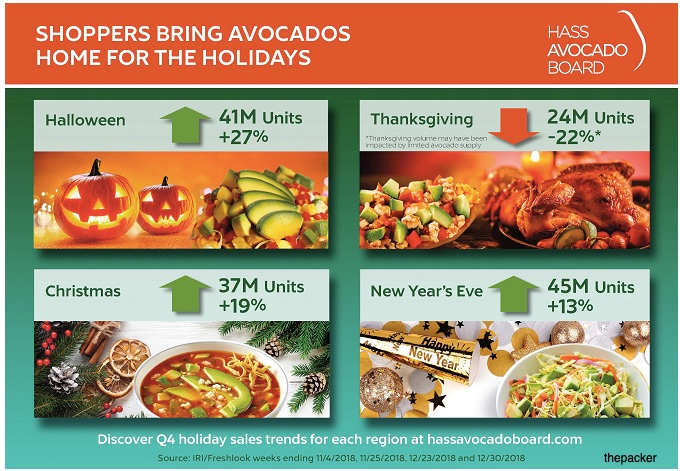 It all happened because of trade.

Before NAFTA, we did not eat very many avocados. Banned from 1914 to 1993 because of worries about the avocado seed weevil, avocado eaters depended on California and Florida growers. Then, the NAFTA deal was signed, implemented, and after 1994, the ban on Mexican avocados was gone. The result? Year round availability. Exports to the U.S. soared. Also though, there was more demand for the domestic crop. It was a win win that continues. With USMCA, tariff free avocados move between Mexico and the U.S.

As we ascended to per capita avocado consumption of 7 pounds, imports from Mexico soared:

And these were the trade flows four years ago that still exist. The width of the line indicates the relative volume. The flow is clockwise, from exporter to destination:

You might enjoy this brief NAFTA explanation. It applies also to USMCA because the two trade agreements are so similar:

Where are we? Tariff free trade has brought us the avocado…

My sources and more: WSJ, Food and Wine, and this medical study had the Avocado Hand details. Then, for the up-to-date facts, there were so many possibilities. They included Bloomberg, the Hass Avocado Board, The Packer, NY Times, and Mexico News Daily. Finally, from 2016, Quartz had some timeless facts and the infographic on trade flows.

Throwback Thursday: What Past Super Bowl Ads Said About the Economy