How the 737 MAX Could Change Your Vacation Plans

Recently, we looked at where the Boeing 737 MAX global supply chain was hit when the plane was grounded. The impact is just as massive for 737 MAX demand.

We can start with the airlines.

American Airlines is typical. It had accepted the delivery of 24 737 MAX aircraft and was waiting for more. Planning at least 70 days in advance, it sold tickets, scheduled flight attendants and pilots, and deployed maintenance. Then, on March 13, 2019, the MAX was grounded. Although it mainly flew between the NYC and Miami areas, American’s entire route network was disrupted. Somewhere else, a flight had to be cut so that a plane (maybe an Airbus) could do the Miami route. Even with the adjustments, they had to cancel approximately 140 flights a day. Imagine how many extra phone calls they must have received.

Still though, expecting it to be temporary, no one was massively alarmed.

Instead, the plane’s problems have multiplied. Last week, Boeing announced yet another software concern. And, even after the aircraft gets final regulatory approval, there will be delays. Pilots will need simulator training. The planes that were delivered will need weeks of preparatory maintenance. American estimates the return date is early June 2020. No one is sure.

Together, we could have close to 10,000 monthly fights cancelled. But, exclusively flying 737s, Southwest was hit especially hard. They ordered 383 737 MAX aircraft. Having received 34 that it cannot use, each day, it is canceling 330 flights. Southwest hired hundred of pilots that it doesn’t need for now.

On the demand side of the aircraft market, a long list of unhappy customers ordered the 737 MAX. To American and Southwest, we could add United, Air Canada, Ryanair and 50 (or so) domestic and international buyers. Yet no one can switch to Airbus because the wait time is too long.

As an image of the market system, the circular flow model illustrates the 737 MAX’s huge economic impact. In its upper loop we have the final goods and services it affects. Meanwhile, the lower loop takes us behind the scenes to where production creates incomes.

For the 737 MAX, we have the potential spending that passengers would have been doing. There are also the cancelled flights that never get revenue. Then, in the lower loop, we can see the factors of production that the airlines combine to fly their passengers.

I’ve labelled just a few of the many possible examples: 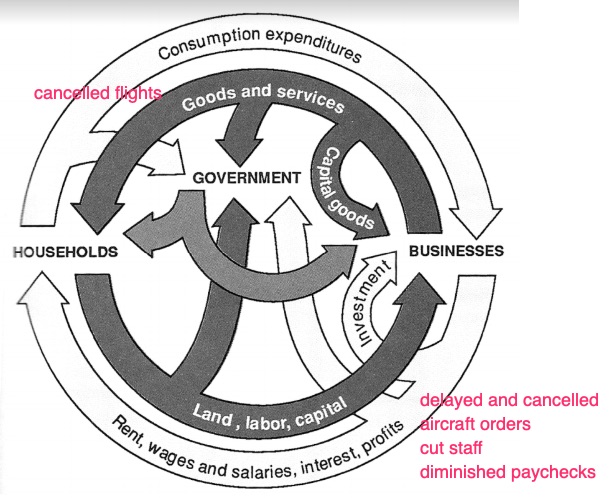 It all takes us to a diminished GDP. Because of fewer flights and suspended production, the U.S. GDP could be pulled down by .5 percent. It also takes us to vacation plans that might be changed.

My sources and more: WSJ’s Journal podcast of the 737 MAX’s impact made yesterday’s walk so much more interesting. Then, The Dallas News also came in handy. Finally, you might want to take a look at this Wikipedia list of 737 MAX orders. It is outdated but gives a good idea of the magnitude.

Our featured image of grounded 737 MAX aircraft is from Reuters.

Our Weekly Economic News Roundup: From a 737 MAX to Wine Consumption