Men and women describe their performance differently. When interviewing for a job, negotiating for a salary increase, or taking the credit for some group work, the male female self-promotion gap affects what others think.

In a recent study, researchers looked at self-promotion. Believing it’s a plus, they said it reflects a person’s pride in an accomplishment. Their goal was to compare how men and women display self-promotion.

In the study, one group of participants took a 20-question test. A second group played the role of employers. After taking the exam, the test takers were asked how many they thought they got right. They also had to assess how well they thought they fared on a 0 to 100 scale. After that, the “employers” learned the test scores and the assessments.

When asked to estimate the number of correct answers, the men and women responded differently. The men’s average guess was 10.57. For equal performance, the women said they got 8.45 right. Similarly, they were asked to decide if they performed well on a 0 to 100 scale. Although they performed equally, the men said 61 and the women, 46. Even when all were told they had gotten 15 out of 20 correct, the assessment gap persisted. 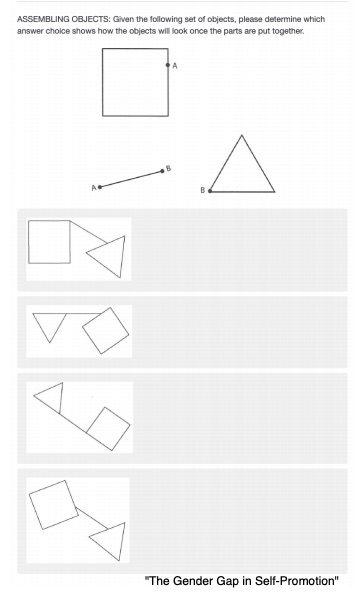 On the employer end, the assessment answers made a difference. Test takers were asked if “I would apply for a job that required me to do well on this test.” They also decided if “I would succeed in a job that required me to perform well on the test.” The people who expressed they would succeed were more likely to get the hypothetical job and the higher pay. 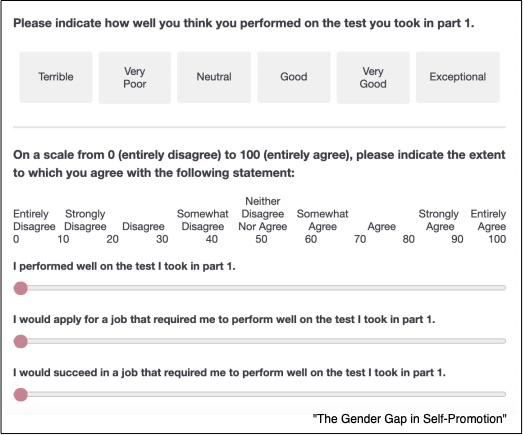 Researchers eliminated confidence because the assessment gap persisted even when all knew their results. They also discounted the need to inflate results. In the public, the private, and the ambiguous versions of the study, the results were constant. It did not matter whether test takers thought “employers” would know their grades in the “public version” or not when it was private. The self-assessments were still divided by gender.

Whether you are filling out a job application, presenting a report, or leading a group, your self-assessment can affect what others believe.  A behavioral economist could suggest that what you say about yourself creates an expectations bias. You are shaping how others will judge you. You also could be contributing to gender related workplace challenges.

So yes, with less self-promotion women do short change themselves. But scholars still need to figure out why.

My sources and more: My NBER Digest monthly email led me to the self-promotion gender gap. The paper was interesting. I recommend taking a look.