During 2016, South Dakota said that online retailers with sales exceeding $100,000 or 200 transactions had to be taxed. The legislation was unconstitutional and they knew it.

But now an internet tax is the law of the land.

Let’s see what it has cost us.

Until 2018, a Supreme Court decision said many of us did not have to pay a sales tax for an online purchase. Only sellers with a physical presence in the state owed that state money. So, when South Dakota asked all out-of-state sellers to collect taxes from South Dakota buyers, several of those retailers took them to court.

After the Wayfair decision, paying the online tax became the law in New Jersey. Its rules were the same as South Dakota’s. Everyone paid except for the smallest sellers whose sales were less than $100,000 or fewer than 200 transactions.

Yes, other states passed similar laws but they were not necessarily identical. California has a $500,000 transaction max as its threshold. Then there are the 38 states and Washington D.C. that said Amazon and other central marketplaces had to do the math. Beyond all of that, states like California defined what they meant by sale and purchase.

This is just one half of page 4 of California’s 13-page tax matrix for remote sellers: 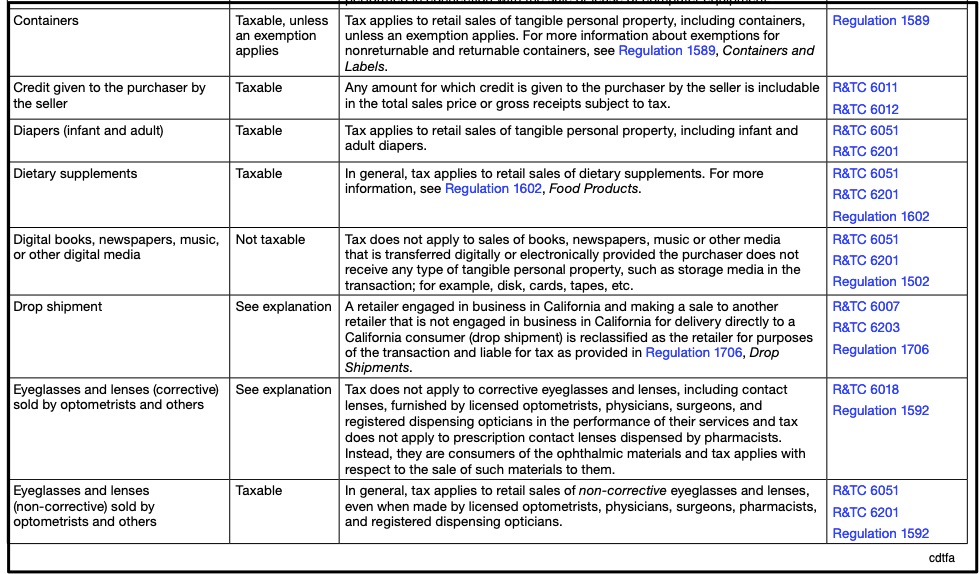 Imagine if you own a small company. You have to figure out what you owe where for at least 50 different places.

Citing a typical response to the decision, WSJ reported that the 21-employee firm, Darn Good Yarn had to hire a part-time CFO and buy new sales tax software. One person selling 2-way radios in 50 states said he needed an accountant but the person would not fit into the bedroom from which he ran his business. Other people said they needed a full day or two a month to figure out what they owed 35 states.

And still, the playing (paying?) field is not even for the large and small firms. The larger businesses have a financial infrastructure that can deal with the extra data. Smaller companies do not. Although Amazon makes it possible to be a tiny third-party seller with a 50-state market, the Supreme Court just made it more difficult.

Assessing cost and benefit for the Wayfair decision take us to large and small businesses, online and local retailers, state revenue and taxpayers. It can be easier for larger companies to deal with more data than smaller ones. With online retailers paying state and perhaps local taxes, neighborhood stores benefit. And then we have the states that are getting more much needed tax revenue. But they are getting it from consumers who might not be so happy to be paying more.

You can see why it’s tough to calculate the cost of internet taxes.

My sources and more: Thanks to WSJ for reminding me it was time to return to the Wayfair decision’s impact. After that, I checked the state legislative response in New Jersey and California. But you can check your own state here. Finally, I also recommend this Vox Reset podcast on Amazon’s presence in Roundup Montana.

Several sentences in today’s post were in a past econlife.