Why It’s Time to Think More About the Time

Although Florida voted last year to perpetuate daylight saving time (DST), it still “fell back” to standard time this morning. Instead, Florida and six other states are waiting for the Congress to say okay. Then, all of us throughout the U.S. can perpetuate DST.

The schedule for the time switch: 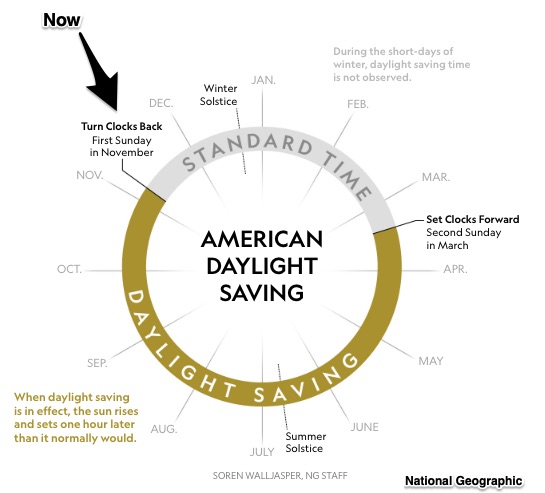 Daylight saving time began temporarily during WW I, was also implemented during the second World War, and became U.S. policy through the Uniform Time Act of 1966. Hoping to save energy, the Congress had clocks “spring forward” an hour. That extra hour of daylight at the end of the day was supposed to diminish the need for electricity. Although most energy use studies indicate we save none, for other reasons, the switch to DST continues.

It need not. We could just stick with DST.

By keeping us lighter later, researchers hypothesize that DST diminishes what crime costs us. According to a 2015 paper, with DST, robbery rates fall by 7 percent during the entire day and 27 percent at night. Because of robberies, we have a direct dollar and earnings loss, medical bills, and legal expenses. As a society, we pay for police protection and jail. Together, they add up to an estimated tab of $42,310 per robbery. In one year, just for avoiding those crimes, DST could save us $59.2 million. When we add rape, the total soars to $246 million. (I know the numbers are estimates but we can save from less crime.)

DST also makes many businesses happier. During Congressional hearings, the barbecue and grill industry said an extra month of daylight saving boosted sales by $100 million. At the same time, the golfing lobby said its revenue rose by at least $200 million from a month of more daylight. In addition, we have the gasoline industry supporting DST because we tend to drive more when it gets darker later and we also do more shopping, gardening, and home improvement. Even the candy lobby cares because it needs DST for Halloween.

And then there is the switch. When we transition to DST during March, the lost hour of sleep temporarily has a negative impact. Data indicate that traffic and workplace accidents increase. We also report more stress and heart attacks. If we retained DST, then we could avoid the change over.

The most convincing case against perpetuating DST involves school children. Proponents say it is unsafe for educators and our children to travel to school when it is dark. Their opponents suggest a later school time.

But let’s take it all a step further.

We can also take the leap to the same time everywhere. After all, the airlines need coordinated universal time so their schedules have a common reference point. Stock and commodity traders use Coordinated Universal Time UTC to stamp the time of a transaction. They need to know the time to know the price. And, it makes sense that the International Space Station uses UTC.

We would have to erase the International Date Line. There would be no more time zones. We just need to use as our reference point the prime meridian (0 longitude) running through Greenwich, England that was established in 1884. When it’s 00.00 there, it’s 00:00 everywhere.

So yes, around the globe, businesses would open and close at the same hour. On the East and West coast, and in the Midwest, all Starbucks could have similar opening and closing times. Those in the San Francisco financial district would no longer need to open at 3:30 or 4:00 am.

Standardization facilitates commercial activity. Hundreds of years ago, when the length of a yard differed from one village to another in France, transactions were constrained. Traveling merchants first had to figure out what quantity of fabric they were dealing with. Similarly today, it helps to have the same currency, the same weights and measures, and the same time–especially if you are working with someone who is half a globe away.

I do wonder though how we will refer to the different parts of the day. Yesterday, when it was 8:29 pm in Massachusetts, the universal day and time would have been the beginning of Sunday at 0.28:32. Do I call it morning if the sun is setting here?

I know there is lots to consider. But the bottom line is that we can decide what time it should be.

My sources and more: Always interesting, the Numbers person at WSJ had a July column on universal time. From there, the possibilities multiplied. I took at look at Spending Time by Daniel Hamermesh and a CATO article from Steve Hanke and Richard Henry. I also enjoyed the National Geographic and Tufts discussion  of the DST debate. Meanwhile Brookings and this research focused on DST’s diminished crime rate.

Our featured image is from Pixabay. And, please note that parts of the sections on UTC and standardization we published in a past econlife post.