Six Small Facts About Globalization That Are Really Big

When we looked at Six Facts About Globalization, there was lots we did not say.

Six (Small) Facts (That Have a Big Meaning)

1.  The reefer plays a huge role in our global transportation infrastructure.

Everyday, the reefer–the refrigerated container–touches most of our lives. It all began during the 1950s when a trucker named McLean figured out the container box. Ideal for dry goods, the box made shipping more efficient because nothing had to be unloaded until the last stop. The ship just docked and its container was moved to the truck or the train.

Below, a container is being moved:

To find out, they followed perishables from the farm to their destination. Monitoring airflow, temperature, humidity and gas concentrations, and even living in the reefers to see firsthand what was going on, they figured out the optimal environment for every commodity. The result? Individualized reefer climate control.

You can see below the temperatures that different commodities need:

As a link in the “cold chain” part of our transportation infrastructure, the reefer’s efficiency and dependability make produce, flowers, and cheese affordable and available. When not refrigerated, the container box cheaply and conveniently carries everything from t-shirts to TVs.

2. Among the multilateral trade agreements that became a framework for cooperation, the World Trade Organization (WTO) was major.

Signed in 1948, the General Agreement on Tariffs and Trade (GATT) was the first global multilateral agreement to lower trade barriers. It was replaced by the World Trade Organization in 1995.

This is how the WTO describes what it does for its 164 members.

But one dispute between the US and Brazil shows what the WTO really does. In 2002 and 2004, Brazilian cotton growers formally objected to the US farm subsidies that they said gave U.S. farmers an unfair advantage in world markets. In 2009, the WTO agreed and told the U.S. to stop. To make everyone happy, instead of eliminating payments to U.S. farmers, the U.S. sent money to Brazil’s cotton farmers. It also transferred $300 million to the Brazilian Cotton Institute.

The money settlement was ideal because it did not upset international commerce. It is one example of many that displays how the WTO has been a source of rules that perpetuate globalization.

The tomatoes that travel from Sicilian farms to British food markets now have a four to five day trip. Requiring several trucks and two boat rides, they need a smooth journey from Italy, through France to the port of Calais, and then across the Channel to Britain.

The Netflix film American Factory begins in 2008 with General Motors closing an S.U.V. plant near Dayton, Ohio. Quickly, the story jumps to 2015 and the happy arrival of a multinational Chinese auto glass making company. Using its Illinois location to make the glass, Fuyao Glass America resuscitated the abandoned G.M. Ohio plant to bend glass, shape it, and get it ready for U.S. auto manufacturers. The headlines said they would hire 1550 workers.

Fuyao is an example of a Chinese firm making a foreign direct investment. As the U.S. China trade war has heated up, FDI activity has cooled. According to the Peterson Institute, Chinese investment in the U.S. and the EU has diminished because of China’s constraints on capital outflows. However, the US drop is much steeper because of the trade war: 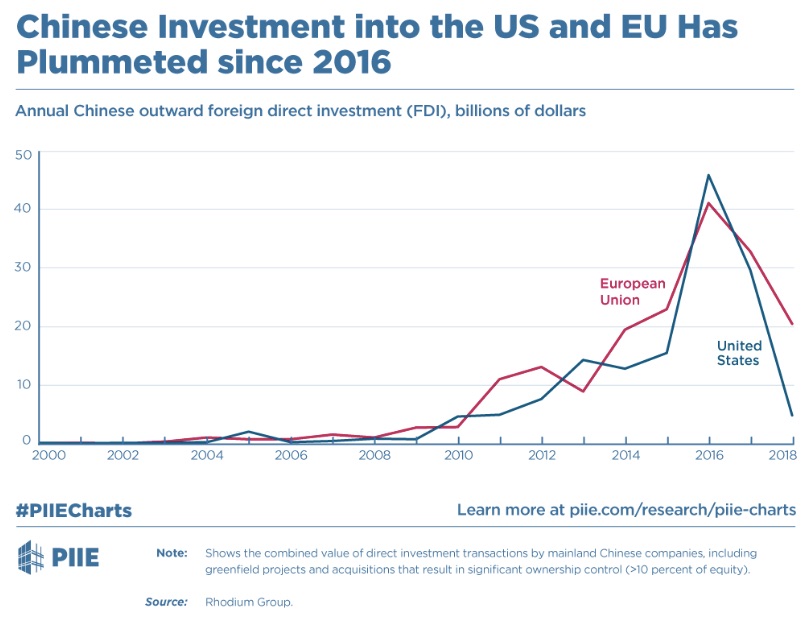 5.  The services that we need to make an auto have been hit by the US China trade war.

Estimated at 30% of its value, the services slice of a car has also been hit by tariffs. Although targeting goods, those tariffs create negative externalities that reshape the services along the global supply chain. What they include ranges from research, engineering, and design to transport and logistics.

6. During the first six months of this year, Mexico moved up to #1 .

Our first ingredient is the US Chinese trade war. Then add to that US demand for the Mexican farm and factory goods that are made by cheaper labor and Mexican demand for higher end US goods. The result is a globalization shift. Whereas China had recently been the US’s top trading partner, no more:

Our Bottom Line: A Slowdown

According to the director of the WTO, the world’s globalization is growing more slowly because of trade tensions. Merchandise trade volume growth had been 3% in 2018 and is expected to be 2.6% for this year. Correspondingly, world GDP growth was down from 2.9% in 2018 to an expected 2.6% in 2019.

Imagining the slowdown, we can picture fewer reefers and tomatoes moving around the world and less FDI.

My sources and more: My go-to site for trade, the Peterson Institute had the perfect primer on globalization and on the cotton dispute. They express much more than I’ve selected. I also recommend that you check out these WTO disputes  and this April report on world trade. Then, the NY Times had the Brexit facts for tomatoes, PIIE had the FDI statistics, Quartz told about Mexico’s rise to #1, and WEF told about services.

Please note that several sections from today were in past econlife posts.