Six Facts That We Need to Know About Globalization

Globalization is a gargantuan topic. Reflecting the world’s economic interdependence, it is about goods, services, and supply chains. It takes us to multinational corporations, to trade agreements, to foreign exchange, and much more.

But still, six facts can say a lot.

Signed in 1948, the General Agreement on Tariffs and Trade (GATT) was the first global multilateral agreement to lower trade barriers. It was replaced by the World Trade Organization in 1995. In our featured image, you can see more of the world’s trade framework.

3.   As a result, during the second half of the 20th century, world trade surged.

This Peterson Institute graph uses three colors to display their three different sources. Together they convey centuries of minimal trade and then a 19th and early 20th century increase. The dip is the great depression and wartime and then we have the surge. 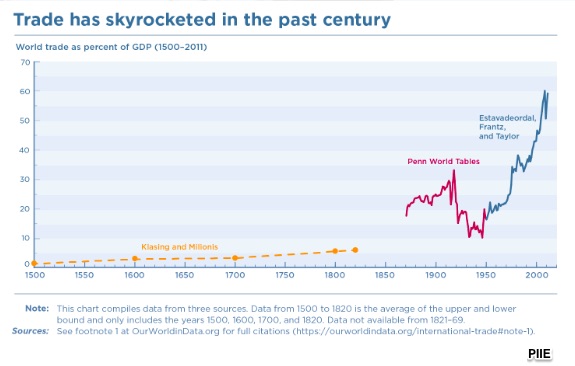 Because China, Brazil and India wanted to participate in globalization through the WTO, they they lowered their rates. 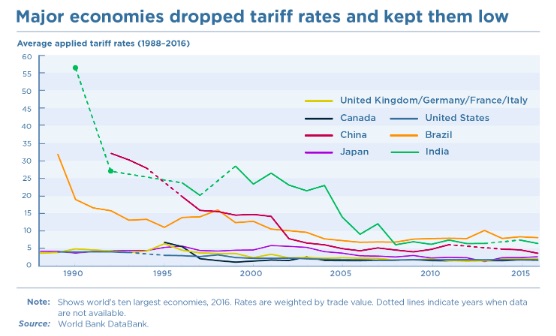 5. An increasingly large proportion of economic activity depends on trade.

If we use the value of the goods and services we produce in a year–our GDP–as the U.S. economy, then we can say that trade equaled one third of that total. And, it was an even larger proportion of the world economy. 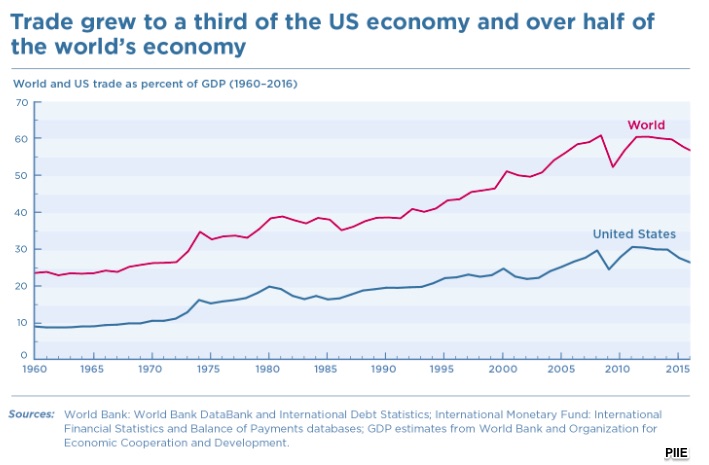 6. China, Canada, and Mexico are the U.S.’s biggest trade partners. 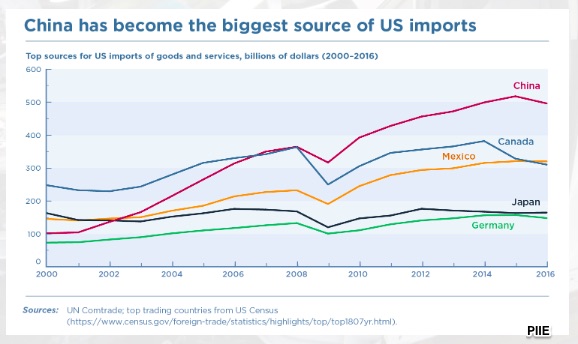 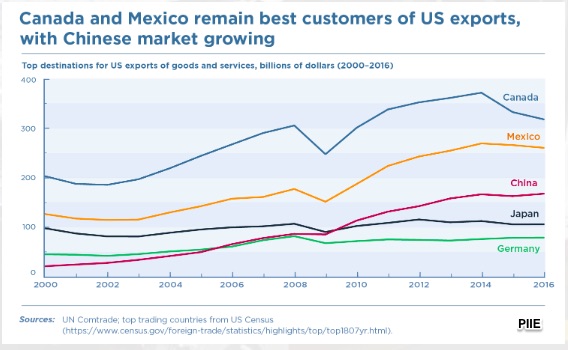 Globalization is a comparative advantage story. First expressed by 19th century economist David Ricardo, comparative advantage just means devoting your land, labor, and capital to whatever you do better. Then when others make what you don’t create and they too do it better, everyone is more productive.

Looking at globalization, David Ricardo would be applauding from his grave.

My sources and more: My go-to site for trade, the Peterson Institute had the perfect primer on globalization. They express much more than I’ve selected.

Please note that part of my description of comparative advantage was in a past econlife post. Do note also that future globalization posts will move from this U.S. focus to other parts of the world.

An Amazon Market in South America

Throwback Thursday: When McDonald's Went to Moscow (and Maybe Changed the World)