After a series of postponed opening dates, recreational marijuana just became legally available on the island of Nantucket. The first dispensary to open was the Green Lady. In other states also, the delays were typical. After all, it takes time to figure out and implement regulatory procedures. Stores meanwhile have to get approvals and work out supply glitches.

In Nantucket  though, the situation is unique because visitors have to cross federally controlled water or airspace. Since pot is classified as a Schedule 1 substance by the federal government, possession in a federally controlled area is illegal. That means any cannabis purchased in Nantucket has to stay there. It cannot be legally transported to or from the island by ferry or by air. Pot edibles, for example, cannot be imported by island “dispensaries.” All is made on the island.

One major problem is tax revenue. States and local municipalities are delighted to have more revenue. However, they cannot be sure of how much.

We can start at the beginning. Ten states have legalized recreational marijuana. In three of them, sales have not started: 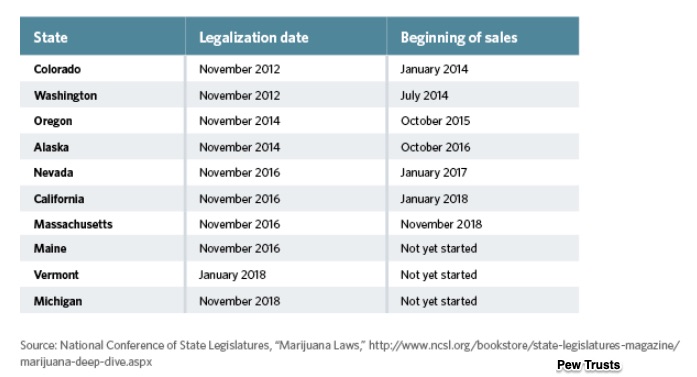 The taxes that states and local governments collect can come from the supply and demand sides of the market. They can be sales taxes that cover multiple goods or an excise tax that specifically targets marijuana. The tax can apply to the weight of the sale or the number of units. It can be a fee or a percent.

These were the different taxes and rates as of February 2019: 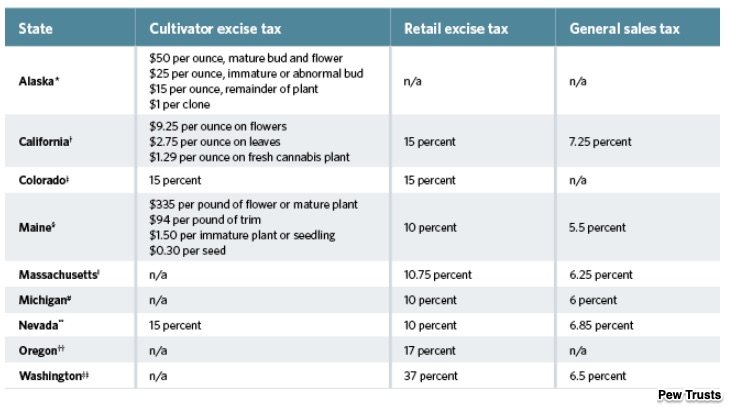 When states create their budgets, they like to have fairly predictable tax revenue on which to base their spending plans. For marijuana, predictability is a problem. Because marijuana is a new industry, demand is uncertain. No one is sure how much legalization will lure buyers from the black market. The number of new users and marijuana tourists is debatable. Most edibles and drinkables occupy unknown territory.

And, beyond that, high tax rates and the cost of regulatory compliance could inhibit legal sales and diminish tax revenue. But low rates could also shrink revenue. Sort of like Goldilocks, states want marijuana tax rates that are neither too high nor too low but just right.

As economists, let’s look at how taxes can impact one small part of the market for pot. Focusing on “substitute goods,” we can see how legal dispensaries interact with the black market.

In legal marijuana markets taxes create a shorter supply curve that reflects the willingness and ability to produce less. Meanwhile, taxes at the point of sale impact the consumer’s demand curve. Thinking of the law of demand, a higher price means less quantity demanded. 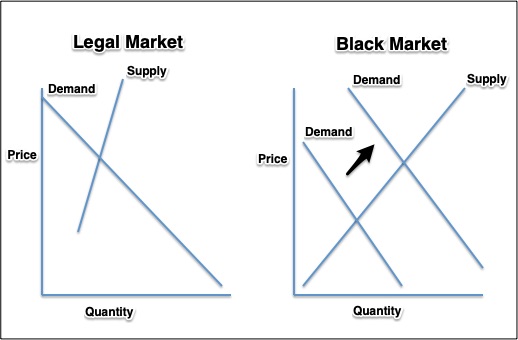 For California, our graphs reflect reality. Probably because of high taxes, the state collected 45% less revenue than projected during the first six months of sales. Returning to our title, we can say that taxes put a lid on the pot industry

My sources and more: This WSJ article reminded me it was time to return to marijuana supply and demand. From there, with some of the same insight,  The Boston Globe provided an ideal complement. But for the perfect summary analysis, I recommend this August report from Pew.

Our featured image is from the Green Lady Dispensary. Please note that, as a Nantucket  business, they offer a strain called Moby Dick.