There is more to a tomato than salads and sauce. We have heirlooms that resemble their parents and hybrids that do not. There are the beefsteaks that can weigh more than a pound and the grape tomatoes that are babies. Then for sauce, we should think of the tomatoes that have less water like the Roma.

And today, we can also think about tomato tradeoffs.

Most of our supermarket tomatoes look perfect while others do not. The difference is a uniform ripening gene that was accidentally discovered during the late 1920s. Until then, unripe tomatoes had darker green patches while the ripe ones could have been any or many shades of red.

There is one problem though.

The gene that creates a pleasingly red tomato eliminates a protein that increases its sugars and nutrients. Consequently, growers can plant tomatoes that cater to our eyes or our taste. As you know, many have selected what we see.

Still, as you can see below, Mexican tomatoes gained massive market share: 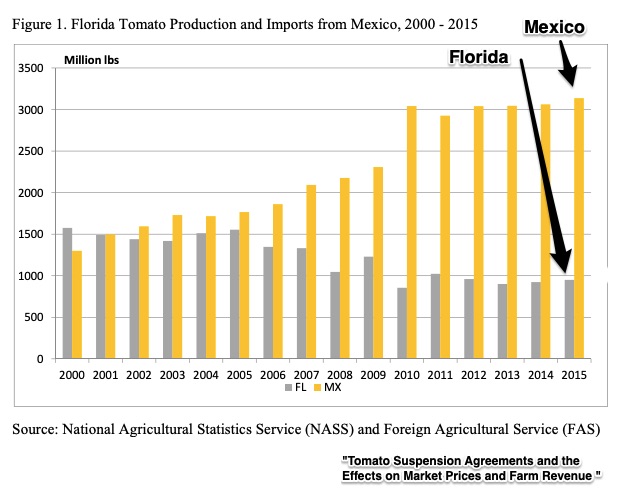 Responding, during May the Trump administration mandated a 17.56% tariff to replace the 1996 agreement. They said even a higher tax was possible unless negotiations produced a satisfactory solution. Yesterday, they did. Negotiators decided that 66% of all tomatoes shipped to the U.S. would be inspected at the border. In addition, “reference prices” would guarantee a minimum. I suspect that farmers have said they are satisfied because both provisions are trade barriers that elevate price.

You can see the tradeoff is  preserving lower prices or tomato farms.

With tomatoes (and everything else) all decisions require a sacrifice. Once we choose one alternative, we sacrifice what we decided not to do. In other words, choosing is refusing.

So yes, many of our tomatoes could be tastier and cheaper. But we chose the alternative.

My sources and more: There is so much to read about tomatoes. For the varieties, eater.com has the detail while the genetic history is at sciencedaily. Then, for some trade history, I recommend this Newsmax article and for the newest facts, The Washington Post and WSJ. Lastly, you might want to hear the facts from the farmers. And for fun, this is the 1893 Supreme Court decision that called the tomato a vegetable although many of us believe it’s a fruit.

What the RV Recession Indicator Tells Us