It probably was not a coincidence. So let’s take a look.

Firstborns behave similarly because their parents probably had the time to focus on them. In turn, that attention meant these firstborns wanted to please their parents. As a result. they read more books and spent more time on their homework. Correspondingly, they were more responsible and took the initiative,

It is also possible that biology and siblings had an impact. Researchers have theorized that a mother’s womb environment can change from her first to later children. Thinking of brothers and sisters, it makes sense that the oldest child gets practice with being dominant.

Years later, as adults, firstborns wind up with personalities that are suited for top managerial positions and for politics. The data show that firstborns are 28% more likely to be CEOs and top executives when compared to third borns. They earn more and have more education.

Shown below, in a large family, it’s likely that the younger children have less education : 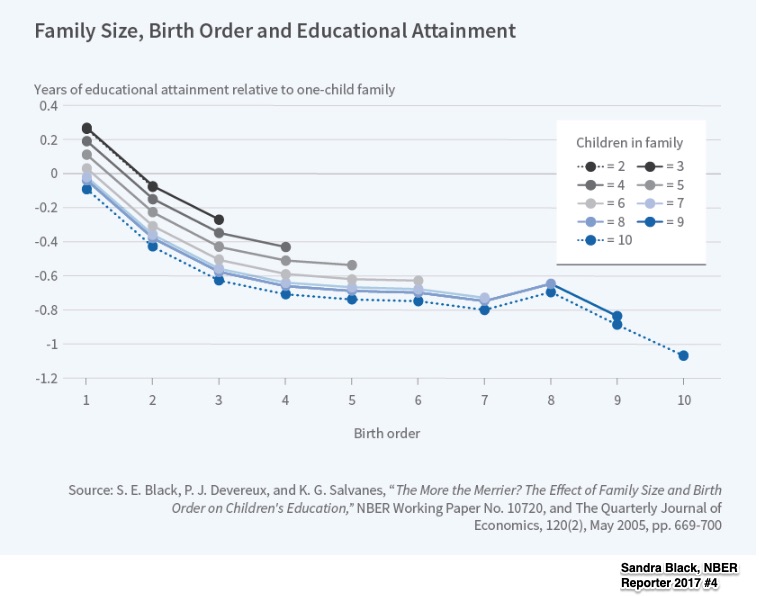 Looking beyond the Swedish study, one example is the 1,582 CEOS surveyed in 2007 with 680 firstborns. For U.S. presidents also, a majority were the oldest son.

When economists talk about human capital, they mean the skills, the education, the intangible tools we acquire that let us do a better job. Just like more physical capital increases our productivity through labor saving tools so too can our parents expand our human capital by shaping our non-cognitive abilities.

Where are we? Returning to our title, parents create a CEO simply by doing what comes naturally for their firstborn child.

My sources and more: This Atlantic article started me thinking about the significance of birth order. From, there, the possibilities multiplied. For some academic insight, do look at at this NBER Reporter and this paper. Then, for a lighter read, you might enjoy  Business Insider, Entrepreneur,, and more of the Atlantic.