Why We Should Worry About Our (Top) Banana

The banana and the dinosaur could be similar. Yes, the bananas we buy are still here, But they just took one step closer to extinction.

The banana we eat now is the Cavendish. Described as second rate because of its bland taste, the Cavendish was not always the top (banana). The banana it replaced sounds wonderful.

Called the Gros Michel, it was a resilient banana that didn’t ripen too quickly nor bruise too easily. Super tasty, the fruit reputedly had personality. Sadly, it succumbed to a disease now called Tropical Race 1 that started to spread during the 1920s.

By 1960, the Gros Michel was history. Although the Cavendish was low in taste and needed pesticides and an ethylene gas ripener, it was a survivor. Having made it through the Race 1 blight, the Cavendish was chosen.

Now though, in a very similar way, it too is being gradually obliterated by a new fungus, Tropical Race 4 (TR4). The back-up banana? There is none.

If you look at the map from a 2017 econlife post, you see TR4 red markers in Asia and Africa. No one wanted to see them spread to Central and South America:

But they did. A new map would show a red marker in Colombia.

On August 8th the Colombian Agricultural Institute declared a national emergency after confirming the presence of Tropical Race 4. The fungus typically stops infected plants from bearing fruit. As one scientist explained, “Once you see it, it is too late…”

Without the skin, the average banana weighs close to four ounces. At almost 15 pounds per person per year, our annual consumption is approximately 60 bananas–more than one a week.

The banana is the most bought fruit: 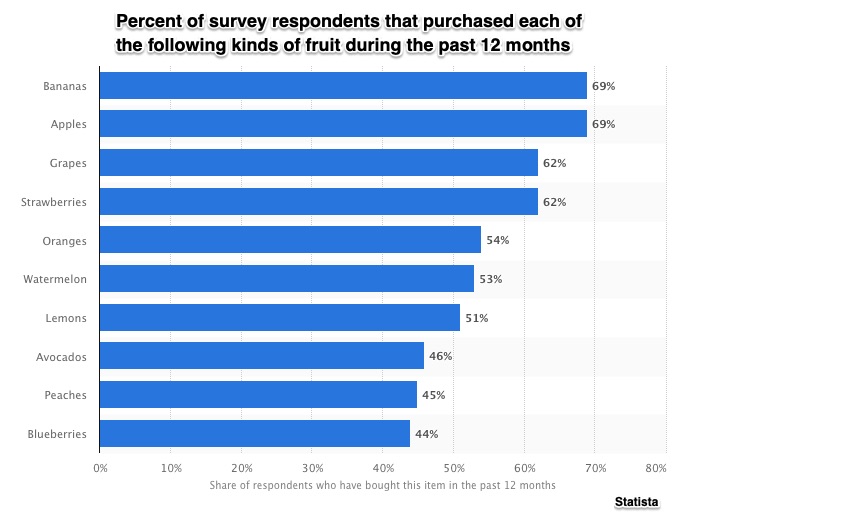 And, behind apples and oranges, it’s the third most popular fruit: 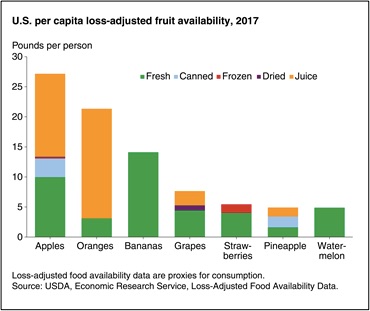 There are lots of other banana varieties but they taste different from what we are used to. So, as economists, we need to ask what could make us switch. The answer takes us to the law of demand. As supply diminishes, the Cavendish will become more expensive, thereby making a cheaper substitute more attractive.

I do wonder though if the substitute will be a banana or whether, like the dinosaur, it will be extinct.

My sources and more: This National Geographic has the 2019 update. But if you want more, this NY Times Op-Ed from Dan Koeppel, this Freakonomics post, and this New Yorker article say all you could want to know about banana economics. Or, for some fun and a taste of banana optimism, you might just watch the Sci Show:

August 2019 Friday's e-links: From Retroviruses to the Travels of a T-Shirt and Average Fast-Food Drive-Through Times