In a recent investor conference call, Shake Shack said turnover was high and hiring was tough. So they decided to experiment with a four-day week for managers in Las Vegas at first and then four other cities. No, pay won’t go down and neither will the hours. The workweek will still be 40 hours but employees will have three days off.

The Shake Shack initiative is one tiny example of how much we work. Let’s take a look.

1.  Looking back, U.S. work hours went way down during the 20th century for the average male worker:

2.  Correspondingly, in the U.S., work became a smaller part of the day.

3.  Currently, among OECD countries, Germans work the least and Mexicans the most.

If they worked as long as people in Norway and Denmark, U.S. workers would wind up with two months of vacation annually. 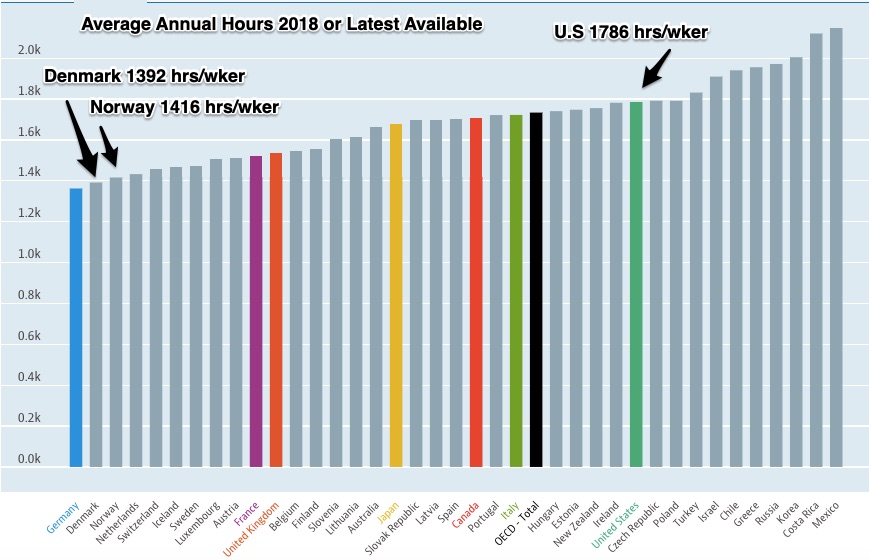 4.. Compared to workers in five European countries, Americans do more work at home during weekends and at night on weekdays. 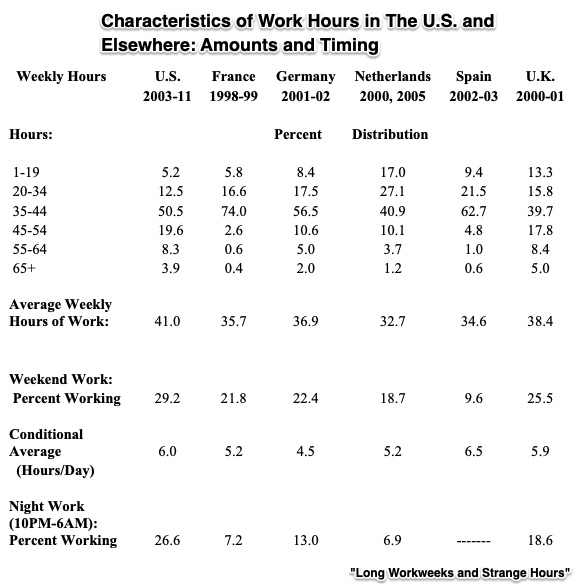 Rather than the lowest paid workers putting in the longest workweek, the highly educated, higher wage workers started devoting more hours to their jobs.

6.  Like Shake Shack, other firms are experimenting with a shorter workweek.

When a Seattle-based design firm tried a four day work week, employees at work had more energy and less time. The combination resulted in more productivity. However, in Sweden among nursing home workers, the problem was the expense. Working five days a week, six hours a day, employees were less stressed and more active. But workers who had a shorter workweek needed paid substitute employees. Paying 17 extra employees for the missed time added up to $1.3 million (12 million kronor).

As economists, we should remember that work is not only about how long, but also, how much. When time is constant but output increases, we have more productivity. With the four day week, the concept is similar. For each hour, output is more if it equals what would have been produced during a five-day week.

Others though would add that we should really be talking about a work-life balance. Less time at work means more time with the family. It enables employees to schedule appointments during days off, feel less harried, and enjoy some hobbies.

Returning to where we began, what does Shake Shack say about how much we work? Perhaps that less can be more.

My sources and more: The perfect match, this New Hampshire radio podcast and this history of work hours at eh.net were the ideal combination, From there, the possibilities included this paper, this paper, and this paper. Also I suggest the Washington Post and Nation’s Restaurant News. But for the most fun, do go to the OECD’s interactive Better Life Index.

Should We Charge Electric Cars?