How the Weather Affects What We Buy

I wanted to share some smiles through this xkcd cartoon: 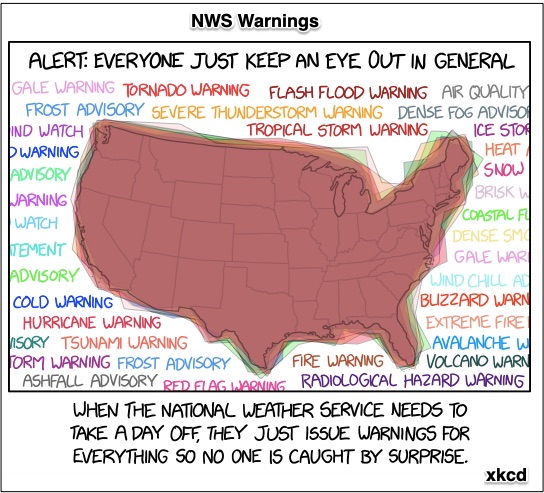 But also, it takes us to recent studies that connect the weather to our economic behavior.

When we hear a National Weather Service warning, our buying behavior changes. In a 2016 paper, economists considered the economic impact of Hurricane Matthew. One goal was to see which retailers gained and who lost business.

Comparing grocers, restaurants, and clothing stores, they concluded that the grocers were the only ones who benefited from the storm. The grocers wound up with a 2.6% sales increase because people picked up more food before and after the storm. Then, as you might expect, restaurants (-4.1%) lost business but it was the clothing stores, with a -6.8% decline, that had the biggest hit.

These were their conclusions. The dots indicate how much sales were above or below normal: 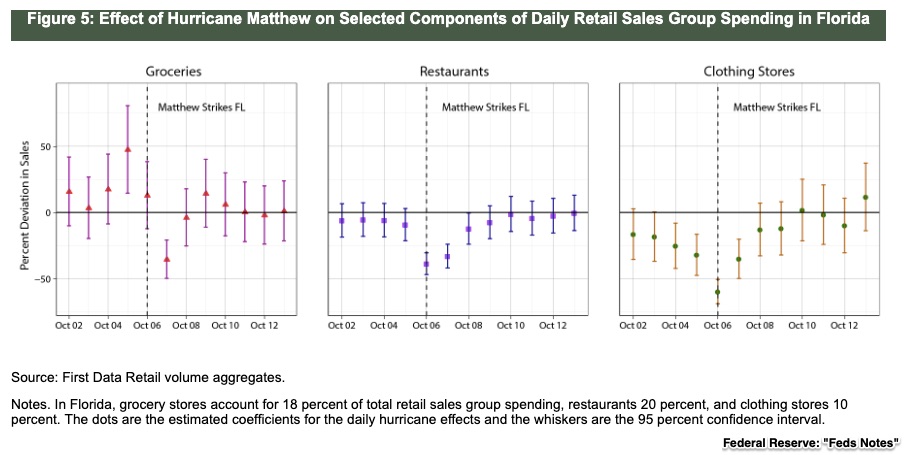 But even normal weather changes affect what we buy.

Categorizing the weather through temperature, precipitation, and cloud cover, researchers looked at 20% of all new car purchases from 2001 to 2008. They found that when the weather is warm, convertible purchases represent a larger proportion of car sales; if it is abnormally cold, dealers sell a proportionally greater number of 4-wheel drive vehicles.

Meanwhile, we could guess that the weather affects our food purchases. But, a British supermarket chain has the precise data. It reputedly knows that we increase our hamburger purchases by 42% when temperature rises from 68 to 75 degrees Fahrenheit. At the same time we buy a lot more coleslaw and fewer green vegetables.

Close to 70% of a GDP composed of Gross Investment (primarily business spending but also residential housing), Government Spending, and Exports minus Imports,  consumption expenditures can sometimes even depend on the weather. So when you hear about a storm warning or just a pop in the temperature, do think of the GDP component that dominates our economy…

My sources and more: This WSJ article is a good starting point for weather’s impact on the economy. From there, the possibilities range from Hurricane Matthew and retail sales to weather and buying cars. And if you want more, do look at this Washington Post article.

Why Avocados Have Become a Luxury Item

July 2019 Friday's e-links: From How We Spend Our Time to the American Dream and Designated Survivor