Perhaps a decade ago, I briefly spoke with the man who had been the Secretary of the Treasury, the President of Harvard, a chief economist for the World Bank.

My question? What is the most important idea we can teach in economics?

Lawrence Summers’s five-word response? “The Power of the Market.”

Today, through a century of consumer spending, we can look at the power of the market.

In his 1993 book, Pursuing Happiness, Princeton professor Stanley Lebergott describes the 20th century changes in consumer spending that made life easier and more enjoyable. Focusing on household amenities, he cites the spread of electricity, refrigerators, and washing machines. He tells us that we had more telephones and medical care.

So, as we summarize it all through BLS (Bureau of Labor Statistics) numbers, please think about how our lives became more comfortable.

Considering the money we allocated to necessities, at 42.5% of our spending, food was the big item, then housing and clothing: 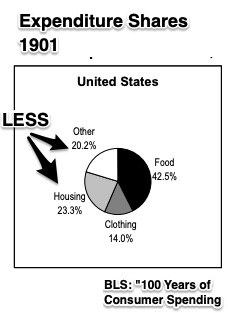 A century later, average U.S. household income had soared by a whopping multiple of 67 from $750 to $50,302. Correspondingly, our household expenditures went up from $769 to $40,748. The big difference though was the proportion. Food spending was down to 13.1% of our spending while housing occupied a much larger share. We also had lots left over for “other”: 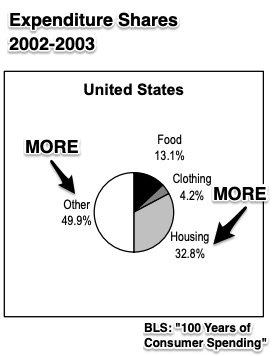 Summarizing it all, you can see that we earned more, spent more, and had fewer children: 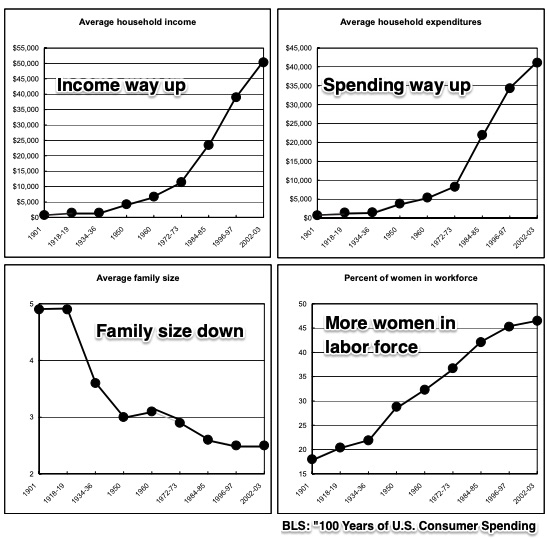 Do have some fun (as did I) checking out our earning power. In 1901, an hour of work in manufacturing bought us almost two pounds of flour. 100 years later, for that same hour, the total was 10 pounds. Looking at the other industries, and pork chops or steak, you see the same magic: 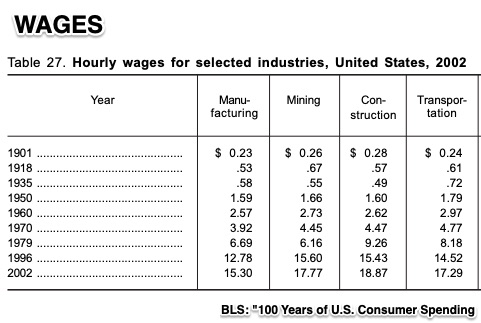 What we spent it on:

Because those BLS housing numbers included utilities, I thought we would take a look at the spread of electrification: 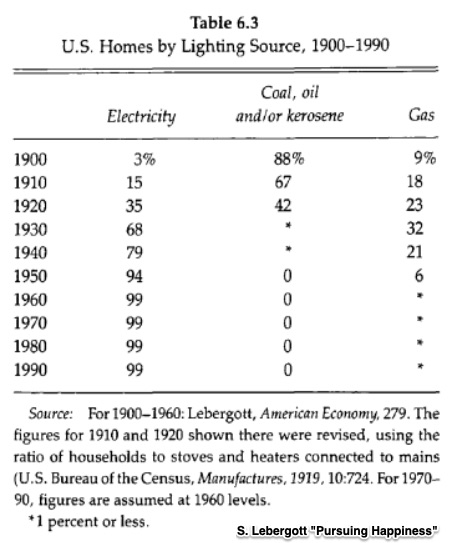 Our Bottom Line: The Market System

It’s tough to defend the market. After all, it is based on incentives that some view negatively like self-interest and profits. And it’s impossible to grasp how millions of consumers and businesses independently will make good decisions. But rather amazingly, guided by “an invisible hand,” together we have produced what we’ve wanted and needed.

By contrast, some people say that we have to leave the important stuff to the government because then one entity is in charge. Based on the history of the market in the U.S., I suggest, as did Lawrence Summers, that the market is more powerful and more dependable.

I should add that I know I am oversimplifying and government, since the New Deal, has played an important role. And I know also that I should point out the market works best when we ethically adhere to our contractual obligations and moderate inequality.

But still, we should respect and remember the power of the market.

My sources and more: This BLS paper and S. Lebergott’s Pursuing Happiness had the consumer spending facts and analysis. I also suggest listening to  the Freakonomics episode with Lawrence Summers for some economic insight.