In addition to hot dogs and nachos, sports fans can nibble on crispy crickets at the Oakland Coliseum. Available in zesty lime or sweet 5-spice, these pouches of crickets were sold during 2018 Athletics and Raiders games:

But they are much more than a stadium snack. This is the story.

Most Americans eat meat…perhaps 95% of us. That adds up to an estimated 220 pounds a year, per person. And with growing affluence in developing nations, the world’s meat eating numbers are climbing.

However, because of the greenhouse gas emissions created by cow burps (and also from livestock related manure, feed, and energy production) meat demand is a problem. One group even suggests that we should give up meat instead of driving if we want to diminish global warming.

You can see why it makes sense to eat a cricket: 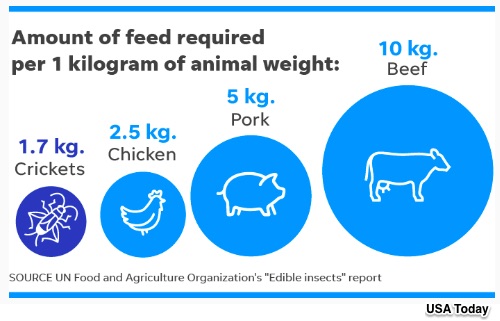 We could get more of our protein from insects. After all, for close to two billion people, insects are a normal part of a meal. But the chance that you and I will serve some crickets or grasshoppers for dinner is small.

At this moment, may I divert to my cat, Scarlet. Typing at my dining table two nights ago, I saw a cricket hop by with Scarlet close behind. I think she devoured it. And that is the idea. At Tiny Farms, they are figuring out how to make pet food from crickets. With pets consuming one-quarter of the meat we eat in the U.S., it makes sense to provide their protein with the bugs they love.

On its website, Tiny Farms explains that they want to be a leader in efficient cricket and cricket powder production. They tell us that enough cricket powder could be produced to feed the vast number of pets in the world with their technology.

This is their rationale: 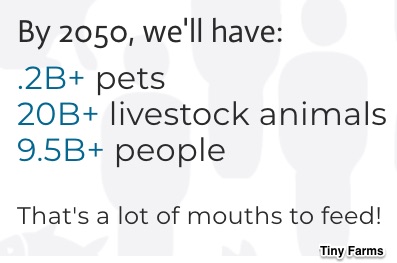 The cricket protein powder that they produce for pet food has a nutty flavor, twice the protein as beef, four times the iron in spinach, and more B12 than salmon. 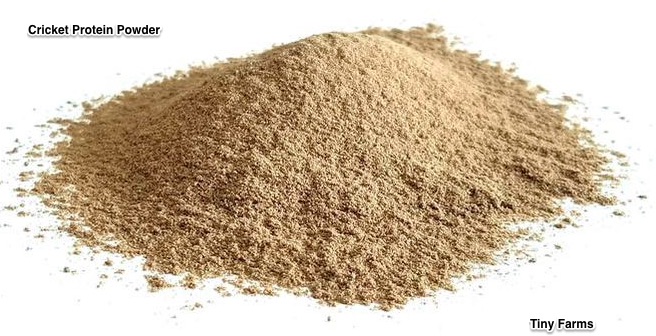 In addition, cricket frass (poop) can be used as fertilizer. (I am not sure how many crickets you need to mass produce the fertilizer.)

Our Bottom Line: Cricket Supply and the Model T

As economists, for now, the crucial side of the cricket market is supply. To make a pound of cricket powder you need somewhere between 4200 and 4800 crickets. Big Cricket Farm said they charge $30 to $50 a pound. Perhaps for that reason, the cricket market for a small batch farm is human gourmet consumption.

This is a small batch cricket farm that caters to the gourmet market:

Like the affordable Model T Ford multiplied car sales, the goal is to bring the price of cricket production down. At Aspire, a startup in Austin Texas, robots feed vats of crickets, 24/7. (Crickets are nocturnal.) As a cricket farm, they hope to produce an automated totally affordable and scalable product that can replace meat in part of our diet. Some of the details take us to a breeding area from which the hatched eggs (cricket babies?) are taken to separate bins to be grown and harvested. Automation is making production cheaper.

Below, you can see more about mass cricket production at Aspire:

So, we have a small batch Youngstown, Ohio cricket farm, Tiny Farms making cricket powder for pet foods, and Aspire working at mass production. Just to give you an idea, at Aspire’s 25,000 foot facility , they can produce 22 million crickets a month. Because crickets have a six-week life cycle, supply can ramp up quickly once they become the next trendy food.

Where does all of this take us? To crickets, the Model T, and creative global warming solutions.

My sources and more: Listening to a Crazy Genius podcast, I learned about cricket farms. From there, the cricket world captivated me. It all began with the Oakland Coliseum and Chirps. But for the real mass production story, Fast Company tells about the startup, Aspire. And USA Today had another great cricket story.

When Pay-What-You-Want Does Not Quite Work Out