Six Facts: What You Always Wanted To Know About Coffee

The first roasted coffee dates back at least to the 13th century. Legend has it that an Ethiopian goat herder named Kaldi saw his goats display a burst of energy after eating some beans off a coffee shrub. So he tried it, felt great, and shared some beans with a local monk (maybe). From there, word spread and the rest is history.

Today we drink more than two billion cups a day.

1.  Coffee prices are trending below the cost of production.

Researchers from Cornell University estimate that it costs, on average, $1.40 to produce a pound of arabica beans while they are selling for as little as $1. One reason is Brazil. With a larger crop and weaker currency, Brazil has been pushing price downward. That shift in supply has diminished prices and put some smaller Fair Trade farmers out of business.

It turns out that the frothy foam in a latte has tiny bubbles that constrain wave energy. The scientists who took a look called it “slosh.”

3. The coffee war between arabica and robusta beans is heating up.

The more expensive and tasty arabica bean has been the coffee of choice whereas robusta was always associated with instant coffee. Recently though, farmers are growing a better tasting robusta bean. Pair that with its lower price and you wind up with a growing robusta market in Asia.

Below you can see Asia’s demand for instant coffee: 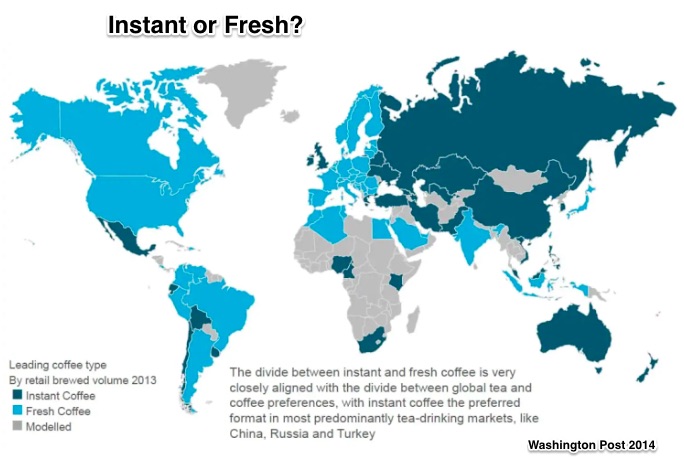 4. The color of your coffee cup can affect your taste.

According to the participants in an Australian study, coffee tastes sweeter in a blue mug than in a white one. Yes, it was the same coffee and the cups had the same shape. But color appears to have made a difference. Although the study had just 18 participants, still, the researchers said their prior experience with color corresponded to its impact on our perceived taste for coffee.

5. EU Membership (Per Person Per Day) Costs Less Than a Daily Cappuccino.

One example is Greece where cup of cappuccino is €2.91. Their daily contribution to the EU is 15% of that total:

6. If you scream long enough and loud enough, you can heat a cup of coffee.

When researchers at the American Physical Society were studying energy transformation, they figured out that an 80 decibel scream could heat coffee to 122 degrees Fahrenheit. The scream just needs to last for 1 year, 7 months, 26 days, 20 hours, 26 minutes and 40 seconds.

Alfred Renyi, a Hungarian mathematician who loved coffee and probability theory once said, “A mathematician is a device for turning coffee into theorems.”

I suspect the same is true for economics.

My sources and more: From the ridiculous to the basic, WSJ has looked at coffee. Two years ago, WSJ had the coffee shouting research. Combined with more traditional information on coffee prices and beans, these articles provide an introduction to all you could want to know about coffee. From there, Politico looked at the EU, The Atlantic has some coffee history, and The Washington Post had more facts. I do also recommend reading about how the color of our mugs affects our taste.

Why School Funding and a "Friends" Dinner Are Similar