When a Magazine Cover Counts

Thanksgiving is the big time for certain magazines. Chock full of ads, the Thanksgiving issue has been called the “Super Bowl.” Today though, let’s just consider the covers that attract us during the holidays.

Do we really need to see another turkey?

Although the print issue is increasingly less important, still, magazines like Food Network have a circulation of nearly two million. Knowing that we do judge a magazine by its cover, they care very much about that image.

No pies. They “are unreliable.’

No piles of mashed potatoes. Even with melted butter, they too just don’t look that good.

However, bon appétit was pleased with this in 2014: 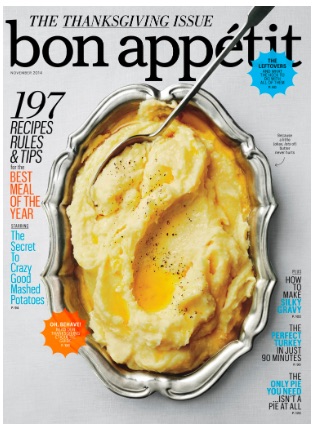 As you might expect though, the most typical cover is the turkey. Deciding to show it carved in 2016, Food Network sold 21% fewer newsstand issues. Since then, they’ve returned to the whole bird. This year the shoot is from overhead to minimize the platter and instead focus our eye on the turkey.

The legs are tied together rather primly: 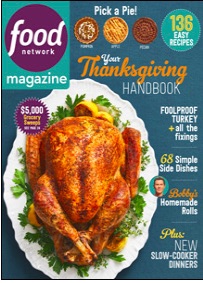 Kicking her (his?) leg up in the air, the bon appétit turkey appears somewhat saucier: 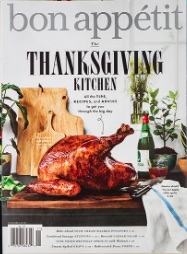 And having a celebrity chef like Ina Garten with the turkey was a huge hit in 2014: 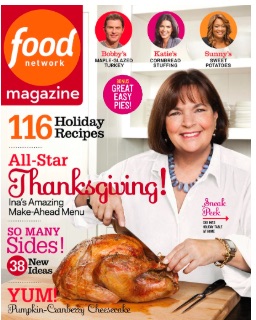 Glamour Magazine just announced that it was discontinuing its regular print edition. While an occasional print issue was a possibility, their future is now digital. Last November, Teen Vogue said it too had departed the print world. Others that made similar decisions include Computerworld, Self, and Information Week.

This graph helps us to understand the drift to digital: 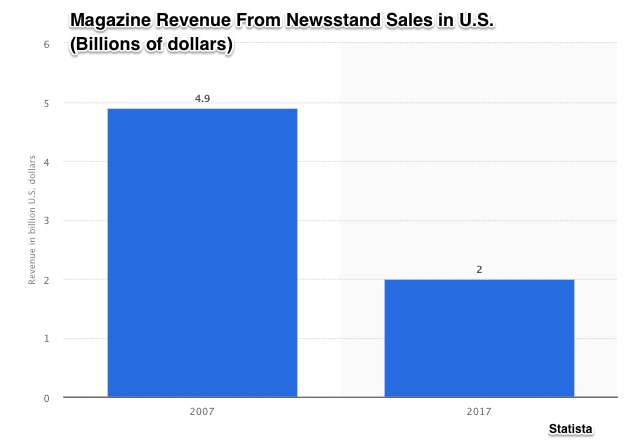 The NY Times tells us that successful magazines had competed with “glossy volumes thick with high-priced ads.” No more. Its age-old business model is changing. The ad revenue is down and readers are moving online.  Firms are trying to figure out how to cut costs and create new revenue.

However, there are always exceptions. For now, food magazines still care about the turkeys on their covers.

My sources and more: The NY Times alerted me to the importance of the Thanksgiving issue. From there, a broader look at magazine competition made sense. However, this discussion of the magazine market was the best I read. And finally, for the future, do consider what a Marc Benioff purchase of Time will mean and what Meredith Corp. is planning for its print media.

Our Weekly Economic News Roundup: From Facebook to Teen Vogue