According to xkcd, if you were paid the federal hourly minimum wage of $7.25 in pennies, you would earn a penny every 5 seconds during your workday. That could also be a penny every 20 seconds over the whole week if you averaged it out. Or, that day’s pay would fill one plastic water bottle with a typical mix of change.

Where are we going? To a look at the nation’s wages and Amazon’s…

Because states decide whether the federal minimum is their minimum, the wage landscape varies across the U.S. To see how, do take a look at each of the following U.S. Department of Labor maps (below). The darker blue indicates how and if the state’s minimum wage law deviates from the federally mandated $7.25:

We should add that some states have a tipping wage that is legally lower than the minimum. Meanwhile at the high end, last July San Francisco became the first major U.S. city to mandate a $15 minimum hourly wage.

And that takes us to Amazon.

Yesterday, Amazon said it would hike wages to a $15 minimum on November 1.

Affecting 350,000 U.S. employees, the raise targets all full time, part-time seasonal, and temporary workers. However, some of those workers will have their stock options and incentive-based bonuses eliminated. (Correspondingly, in the U.K. beginning November 1, the increase will be £9.50–with higher wages in London.)

Amazon’s decision could reflect a national trend. In September, the NY Times told us that “wages sprinted forward” because average hourly earnings were up 2.9%- compared to a year earlier.

From here though we have several qualifications:

Since people at the top pull up the average number, the median numbers tell a different story. In the most recent BLS report I could find with a comparison, the hourly mean (average) was $24.34 while the median was $18.12.

Inflation also should moderate our enthusiasm. During the past 12 months, the inflation rate has been approximately 2.7%. That is mighty close to the wage rise. It leaves us with just a .2% increase if we think about purchasing power.

Having looked at all of this, I leave you with the one wage yardstick that grabbed me. This is one image of the Atlanta Fed’s Wage Growth Tracker. Do visit their web site to move among the different metrics. It was interesting: 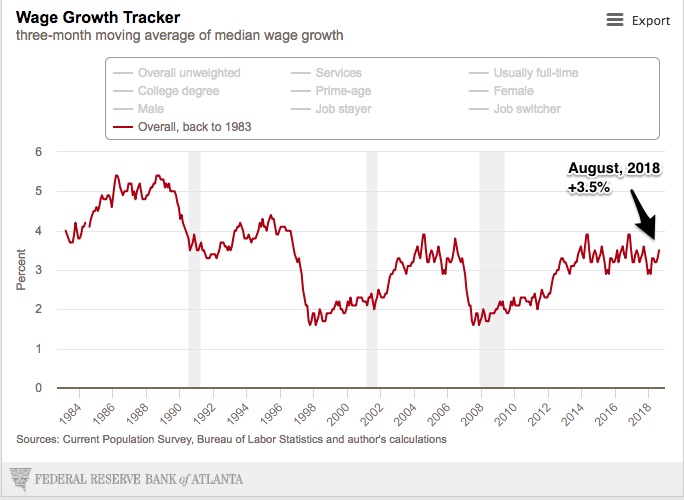 So where are we? Today’s title asks if wages are growing. Our answer? It depends.

My sources and more: What If from xkcd tells more about penny and dollar wage physical equivalents. Leaping far from our frivolous start, our wage maps were from the Department of Labor while we got wage data from the NY Times and BLS. Then, for the Amazon news, I selected the Washington Post  from a slew of possibilities. But if you just go to one place, the wage tracker from the Atlanta Fed was by far the best.

The Cash We Love to Stash

What the GDP Leaves out (And Should It Matter?)