What the GDP Leaves out (And Should It Matter?)

Assume that you married your paid baby sitter. Although that person continued caring for the kids, the GDP would decrease.

Where are we going? To the work we do at home.

The Money Value of Work That Doesn’t Count 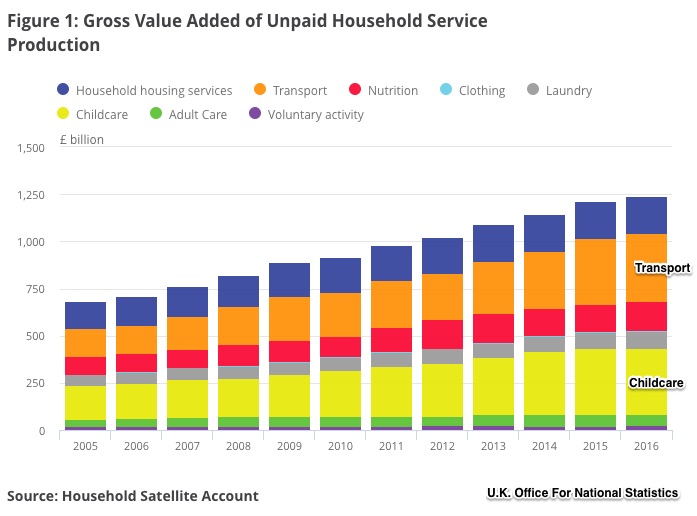 When ONS looked at who did what, it found that women put in 26 hours a week and men, ten hours less (2014). Yes, men did devote more time to transport, but not for childcare or laundry or any of the other categories. As for age disparities, weekly household work hours for 26 to 45-year old females were close to 34 hours–far exceeding the men and other age cohorts. Finally, the ONS estimated that if paid, the average woman would get £259.63, much more than the average man’s £166.63.

Similar to the U.K., U.S. moms devote many more hours a week to unpaid household work: 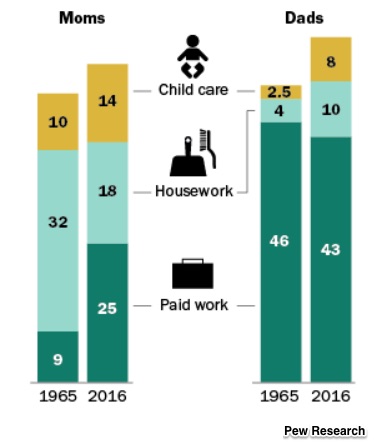 However, Pew Research also tells us that “women’s work” is increasingly becoming men’s work. In a 2018 report, we learn that dads who live with their children are spending more time “helping out around the house.”

Those words though indicate that women still remain the house manager with primary responsibility for unpaid household work.

When Nobel Economics Laureate Simon Kuznets developed the national income accounting that led to the GDP during the 1930s, he had compelling ideas about what should be included. It had to be the legal goods and services that we paid for. Only then could we quantify what we produced.

Our problem now is WHO  we exclude. Because women are responsible for much of the unpaid household work, we convey a demeaning message. After all, we tend to value what we measure. However, as the trend toward men doing more continues, perhaps the message will change. Or, as others suggest, we might develop a new, equally important, measure of national output.

And then, when you hear that a babysitter became someone’s spouse, you will imagine a man marrying his employer.

My sources and more: H/T to Kiana for alerting me to the Quartz article about U.K. housework. From there, the ONS reports on value and gender had the details and Pew Research had the update.

Our Weekly Economic News Roundup: From Dollars to Donuts