Six Facts About Marijuana and Money

Marijuana is classified as a schedule 1 drug by the federal government. Schedule 1 means it has no “currently accepted” medical use and “high potential” for abuse. It is grouped with heroine and peyote.

2.  States have said that marijuana is legal. 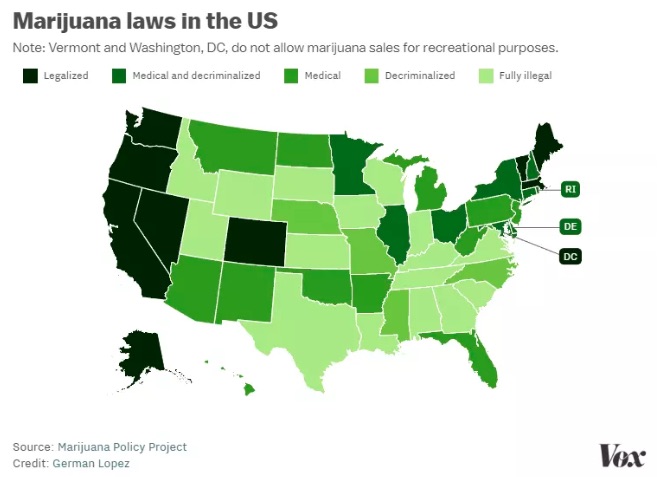 3. Marijuana sales are way up.

People are smoking marijuana, sipping marijuana-infused drinks, and eating marijuana edibles. Because producers are concerned with branding, they are selecting catchy names like Chocolope (with “rich yet dry cacao notes”). Sales have steadily gone up:

It is a hassle for a bank to deal with a marijuana firm. Because federal law says that  marijuana-related activity is “suspicious,” each transaction requires a report. As a result, most banks refuse to open marijuana industry accounts. The result? It’s a cash business.

Curious about whether federal statistics would include marijuana, I called the Bureau of Economic Analysis (BEA) in Washington D.C. They said the marijuana data that was in state GDP numbers was slowly entering federal totals. At the time though, it was minimal.

Including commercial and investment banks, credit unions, and pension funds, financial intermediaries enable businesses to invest and expand. They let households finance new homes and buy cars. We need banks for deposits, for credit and debit cards, for cashless transactions.

Because of the clash between federal and state law, the marijuana industry has grown with minimal support from financial intermediaries.

My sources and more: Marijuana money problems are described everywhere. If you would like to read more about financial regulation, do look at Brookings. But for the whole picture, a Vox explainer has the perfect overview. Finally, here is Colorado tax info, federal drug classification, and more from Quartz. (I should add a description of the frenzy surrounding Tilray, a Nasdaq listed marijuana stock.)

Our featured image is from the AP via Quartz.

The Problem With Free Pizza

Our Weekly Economic News Roundup: From Waffles to Pizzas