Deciding Who Gets Medical Help During Disasters

Two years ago, I shared the lifesaving dilemmas created by Hurricane Katrina. Having just read Five Days at Memorial, I focused on an isolated medical staff at one New Orleans hospital. When flood waters rose, they had no electricity, 100 degree temperatures, and an unbearable stench from overflowing toilets. Because their technology failed, they had to decide who to help and who to abandon.

At the time, there was no protocol to guide their decision-making.

Now there is more.

After the Memorial tragedy, a group in Maryland initiated a community forum. The goal was to create recommendations for a triage protocol. Defined as “sorting,” triage refers to how we allocate limited resources during a medical emergency. Its origin takes us back to a Napoleonic general who treated the sickest soldiers first.

For the Maryland study, researchers gathered 324 individuals. Including medical professionals and lay participants, the forum unfolded during 15 meetings. They were told that mechanical ventilators were scarce during a (fictitious) pandemic. Through small group discussion, they had to decide who gets to breathe. They had six alternatives:

At first, participants tried to focus on how everyone could get care. Also, many wanted to know whether someone was a criminal or clergy, rich or poor, insured or uninsured. They were told that none of those issues could apply…only the six choices.

Rather than yes or no, they could answer never, rarely, sometimes, often, always. Then, using the response, the report included the following table. You can see that the preferred priorities were the individuals who would survive in the short and long term. Few selected the young or a lottery:

Answers to a second question also reflected some division between the lay group and the medical professionals. This question was about removing someone’s ventilator so that someone else could use it. More professional than lay people said yes, remove it: 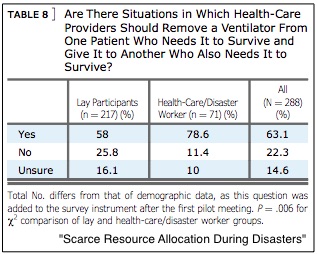 Having these answers, I would only ask if people observe the rigidity of a protocol when making excruciating decisions during a real emergency.

At this point you may be thinking that triage dilemmas are about ethics and healthcare. But triage allocates limited resources. And allocating limited resources is what economics is all about.

My sources and more: So many stories relate to triage. They begin with the Napoleonic General who first said the wounded should be treated in order of need. They include the decisions made at Memorial Hospital during Katrina that were described in Sheri Fink’s book and her NY Times articles. However, if you just want one mesmerizing source, do listen to the Radio Lab podcast, “Playing God.” And if you want the academics of the Maryland study, this paper is for you.

Please note that several sentences were published in a previous econlife post.