Deciding Where the iPhone X Is Most Expensive

If you want to discover where an iPhone X is most expensive, you can just look at the price?

Today let’s see how to decide if a phone is pricey.

When it was first introduced during November 2017, the X’s U.S. price tag was close to $1000 (and that’s without the sales tax unless you live in New Hampshire where there is none.) The phone was described as “the future” because of its face ID authentication, A11 Bionic processing chip, its screen and its camera.

Where is the iPhone Most Expensive?

Our next table though could change your mind a bit. There, India tops the list as the place where the phone is “most expensive” because the metric is the percent of your monthly income:

And finally, we can ask how many hours of work it takes to buy an iPhone X. Using 15 professions, the Swiss bank UBS, calculated a country’s average wage for an 8-hour workday. They then compared it to the average iPhone X price for each place.

Among the following cities–everywhere except Zurich and New York–it takes more than a week of work to buy your iPhone X:

Finally, if we visualize the UBS work day data, then we wind up with these graphs for each of the world’s regions.

Africa and Asia (I added the three cities’ labels and the arrows): 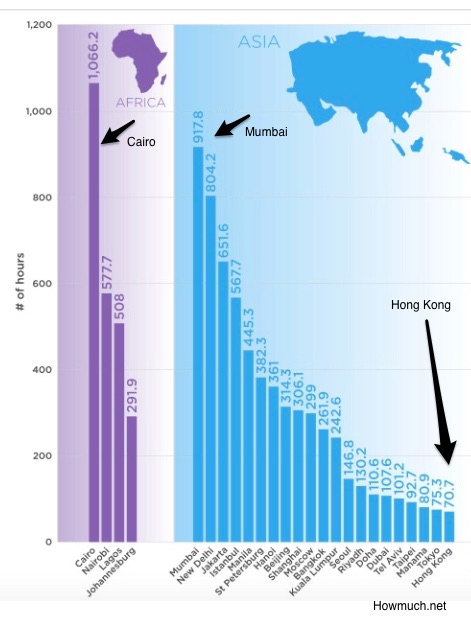 Europe, the Americas, and Australia/Oceania: 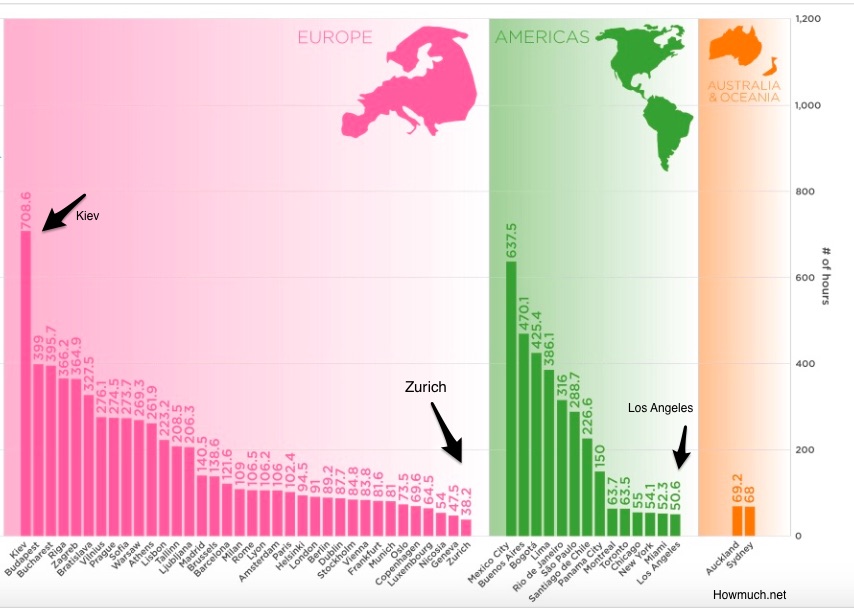 We’ve always said that a price sends a message. However, (mixing metaphors), it’s only a part of the picture. We can decide whether that price is high or low by comparing it to what people earn.

As economists, we would say that we are looking at someone’s real wage rate by dividing the nominal wage rate by the price of a product. Only then can we get an accurate idea of living standards, of purchasing power, and if we look at the workplace, of productivity.

And only then can we know where the iPhone X is truly expensive.

My sources and more: For the iPhone price comparison, Quartz had gathered the data. Then, using the UBS version, howmuch.net did the visualizations.

Please do note that using the data from Quartz and UBS is somewhat like comparing apples to oranges. While the numbers are surely vulnerable, they provide an entire picture that is valid.

Why We Need Speedy Connections

What to Expect from an Older Entrepreneur