Until the 1940s, the teen-age stage of life did not exist. Yes, there was a period of time between childhood and becoming an adult. But the people in it were not identified as a separate group with a distinctive pattern of spending, psychology, fashion, and language.

Then, in 1944, Life Magazine explained what it meant to be a teen-age girl:

“There is a time in the life of every American girl when the most important thing in the world is to be one of a crowd of other girls and to act and speak and dress exactly as they do. This is the teen age..It is a world of sweaters and skirts and bobby sox and loafers, of hair worn long…It is a world of slumber parties and the Hit Parade, of peanut butter and popcorn and the endless collecting of menus and match covers and little stuffed animals.”

So, we wound up with a new explicitly defined stage for people aged 13 to 19.

Now we need another addition.

Used to be that 65 was a threshold.  Before you were a contributor. After you became a recipient. The age that we are supposed to retire, 65 is when you stop work. You receive your pension, your health declines, your activities shrink. Through government spending, labor force income flows to the aged.

For many individuals, 65 is no longer the beginning of being elderly. Men and women can realistically expect to live another 15 or 20 years. And, a large proportion of those individuals are healthy enough to do a job and take care of the home: 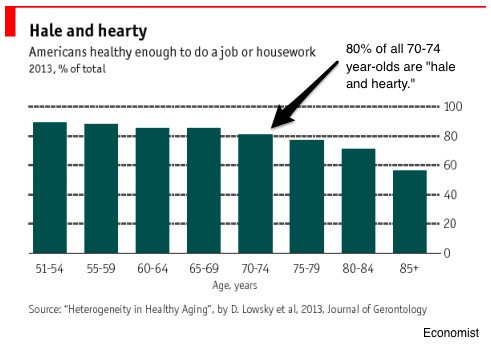 According to the Economist, we have a new stage of life. In a report on longevity, they describe the gig economy jobs filled by the older baby boomers. They also tell us that people who left their full time careers are now on-demand lawyers, accountants, teachers, and personal assistants. We are even told that people between 55 and 65 are more likely to become entrepreneurs than a 20 or 30-year-old. As for unpaid work, older people serve as volunteers and help out at home. In Italy and Portugal, an estimated 20% of all grandmothers care for a child one day a week.

Knowing that a “young-old” cohort exists, we can see how spending and financial products could change. At econlife we’ve already looked at baby boomer consumers. In addition, the “young-old” need new financial products. Social Security in the U.S. was originally designed for people who die soon after payments began. Traditional pensions too were not created for men and women who would need them for multiple decades.

The following graphic displays the categories of financial support received by older individuals. However, recognizing “the young-old” changes the mix: 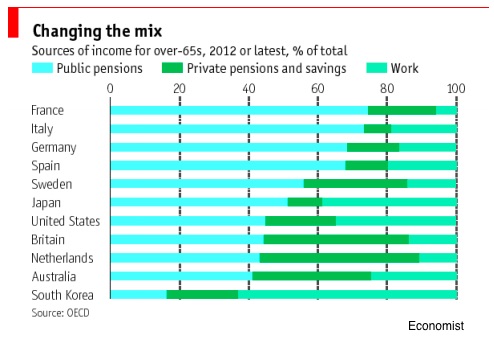 Finally though, as you can see, the high-skilled older worker is the person who will become the “young-old”: 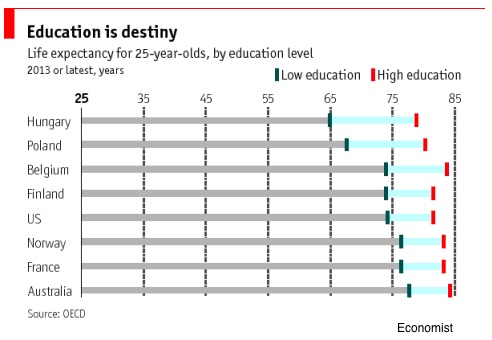 A traditional age dependency ratio compares the 65 and older population to people who are 15 to 64. Its purpose is to show who the labor force needs to support. It lets us know how much of a transfer we need from the young to the old.

That transfer is growing:

But perhaps the teen-agers with whom we began will have less of a transfer to the “young-old.”

My sources and more: Thanks to the NY Times for reminding me it was time to return to longevity.  From there, I discovered the Economist report on longevity that suggested we add a new stage to the life cycle for the young-old. I also had some fun with this Life description of the teen-ager.

What Soccer Can Teach Us About Investing

How We Use Our Time