The U.S. Supreme Court just said that it’s okay for a state to tax your internet purchase.

Let’s see who benefits and what it might cost us.

But first, the case…

South Dakota purposely passed an unconstitutional law. In 2016 it said that online sales exceeding $100,000 or 200 transactions had to be taxed. However, a previous Supreme Court case said that only sellers with a physical presence in the state had to pay a sales tax. That physical presence rule became a powerful incentive. It influenced where businesses located warehouses and what they told consumers. So, when South Dakota asked online firms to pay their taxes, several of those retailers took them to court.

Fiscally, many states can benefit from the revenue boost.

My home state, New Jersey, surely is pleased. Typical of states with ailing fiscal health, New Jersey has a massive structural (ongoing) deficit. Its pension obligations are unfunded and its medical benefit liabilities are high. Several months ago, our governor had internet taxes in his list of extra revenue sources. Similarly, other states are  using South Dakota’s tax approach as a prototype to augment their budgets.

Below you can see that in 2017, 22 states had revenue shortfalls. Add to that 2018 and you get a total of 30 states where internet taxes would come in handy: 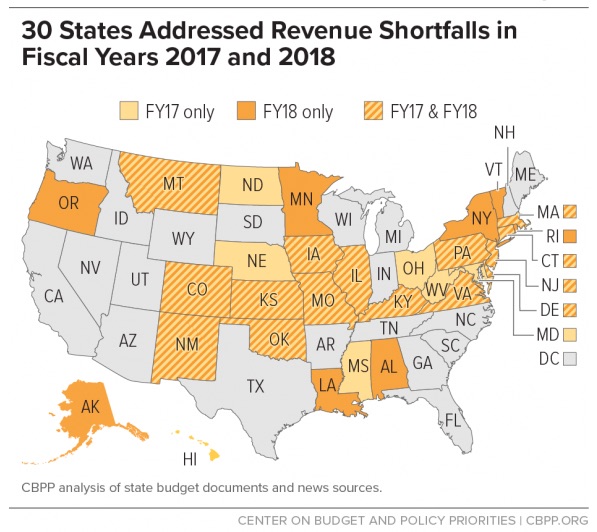 Local retailers will be pleased that online sellers like Wayfair will no longer have a tax advantage. As for Amazon, it already pays sales taxes–everywhere except the states without a sales tax (Alaska, Delaware, Montana, New Hampshire, and Oregon). And third party sellers that use Amazon’s marketplace will now pay taxes they avoided in the past.

South Dakota v. Wayfair, Inc. will touch many of our wallets with some estimating that $8 billion to $13 billion more will flow annually from consumers to state coffers. On the other hand, it is a benefit for the states that need the money. As economists, we can also say that everyone benefits when tax laws minimize transaction costs through less complexity…

…and no physical presence rule.

My sources and more: For a summary of yesterday’s decision and its implications, SCOTUSblog, here and here, and the NY Times had good summaries. Meanwhile, I recommend CBPP and WSJ for more about state fiscal policy.

Please note that several sentences in today’s post were in a past econlife and several were slightly edited after publication.

Throwback Thursday: A Look Back at the Dow

Our Weekly Economic News Roundup: From Moon Dust to Marshmallows