The Real Reason a Springsteen Ticket is Pricey

At $507.83, the average ticket price to see “Springsteen on Broadway” was even more than “Hamilton”:

Above and below, do also look at Gross Potential. The comparison to Gross Gross is interesting:

Because of blockbuster hits, Broadway theater revenue and attendance have hit new highs. This past year, you could have seen one of 67 plays on Broadway. However, the top 10 generated 52% of the revenue. (Interesting that we saw the same phenomenon for blockbuster films.)

The big hits, the preference for musicals, and tourism are the reasons for soaring demand. People want to see “Hamilton,” “Springsteen,” and “”Dear Evan Hansen.” Attendance was also up at “Wicked,” “The Lion King,” and “Aladdin” but tickets were cheaper. As for tourism, New York said international visitors were the big spenders.

Meanwhile on the supply side, we have theater size. With the biggest hits like “Springsteen” in mid-size theaters, the number of seats created “shortages” that boosted prices. You can also see above that “Springsteen” does five performances a week while Hamilton has eight.

Theater owners have become much more aware of who is willing and able to pay more for a ticket. By charging that higher price, not only do they increase their own gross but they also make reselling tickets less lucrative. As a result, for 2017-2018, gross theater revenue is up a whopping 14.4% while attendance increased by only 1.6%.

As economists, we are talking about elasticity. Think a rubber band that stretches when price drops and expands when price falls. Like that rubber band, certain theatergoers can have elastic demand. They know that price will be lower on a Tuesday during the beginning of January when it’s quite cold. They also are willing to sit on the side and avoid paying the average price of a Springsteen ticket.

Sometimes though, with a show like “Springsteen on Broadway,” we want to go no matter what. Then our demand is inelastic: 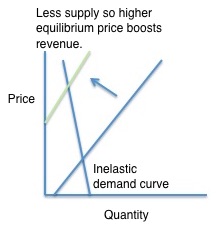 Returning to where we began, we have “Springsteen” with less supply and inelastic demand. The result? A $500 average ticket price.

My sources and more: An article in yesterday’s NY Times reminded me it was time to return to Broadway ticket prices. The Times also provided some insight on tourism spending. However, for all the possible theater revenue facts you could ever want, do go to Broadway League.

Please note that our featured image is from the AP through wtop.

Law and Odor at a North Carolina Hog Farm