We are used to talking about the decline of manufacturing. But it really isn’t. It just depends on where you look.

Between 1985 and 2014, manufacturing jobs declined in the developed world. However, they went up so much in the developing nations and China that we have a net increase.

The Number of Jobs 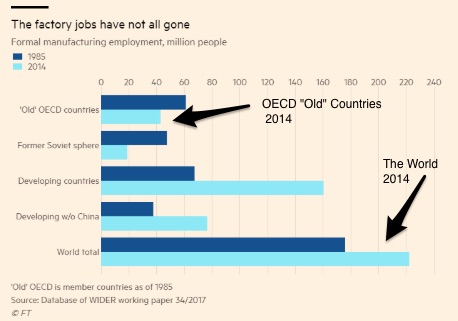 We know though that the world has changed and the number of jobs is only a part of the picture. For manufacturing, we should ask next about the share of manufacturing in an economy.

Here, we see our first impression confirmed. Manufacturing is indeed more important in developing nations as a share of the work force. Everywhere else though, other sectors claim more jobs: 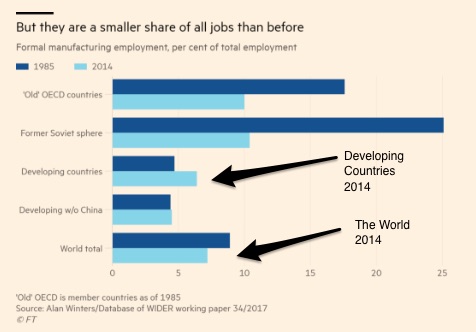 As a last step we can ask why. The answer takes us to comparative advantage. The economist who first explained comparative advantage, David Ricardo (1772-1823), said each nation should make whatever involves the lower opportunity cost. Then, because we are all doing what we are best equipped for, productivity is optimized through specialization and trade.

So, with David Ricardo surely cheering from his grave, an emeritus professor from Oxford uses comparative advantage to explain the shift in manufacturing jobs. His focus was land, labor, and capital.

So where are we? A nation’s land, labor, and capital can tell us why worldwide manufacturing jobs have shifted.

My sources and more: Martin Sandbu’s FT column, Free Lunch had a particularly interesting discussion of manufacturing, “The Factory Jobs Have Not all Gone.” From there I discovered an Oxford emeritus professor’s analysis at Voxeu. Do go to the Voxeu discussion for much more nuance because I have done some oversimplifying.