All You Need to Know About Jobs and Steel Tariffs

A Pennsylvania factory owner asked, “How long can we last?”

CP Industries uses steel imports to make massive cylinders that store high pressure gasses. Now though, their raw material costs will soar. On the expense side, it could cost them half a million dollars more in just six months. As for prices, the increase would be 10% for customers like NASA and the Navy.

However, cheaper foreign competition–even from China–could make all of that moot. The firm’s CEO wonders if they can survive.

The object of the new 25% steel tariff was to save jobs. While CP Industries expects to experience the opposite, is that true elsewhere?

The steel industry has been transformed by technological progress and hit by foreign competition. During the past 18 years, employment was down by 33 percent while output per worker climbed by 43 percent.

The graph clearly shows that jobs are down but production has been somewhat stable: 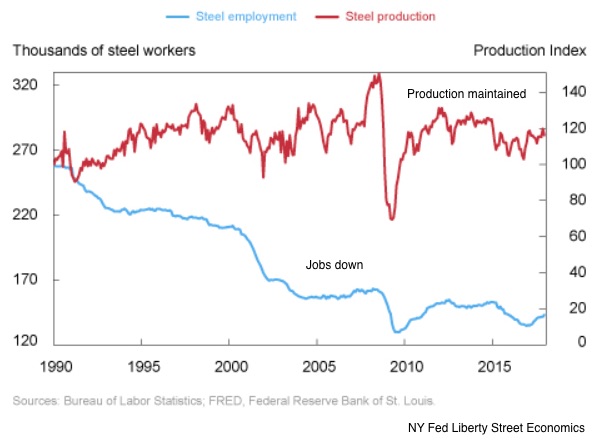 The NY Fed’s Liberty Street Economics tells us that producers typically increase prices by five percent when foreign competition has a ten percent rise. With higher prices, we can ask if new jobs will be created.

One answer came from Quartz. They cite a study that estimates steel, iron and non-ferrous metals jobs will get more than a 33,000 person boost. Elsewhere though, the impact is the reverse. Even in recreation, consumers will have less discretionary money to spend as higher steel prices ripple throughout the economy:

Responding to the U.S. steel tariff, on April 2, China levied retaliatory tariffs on 128 products and named an additional 106 other possibilities. The Brookings Institution illustrated the jobs geography: 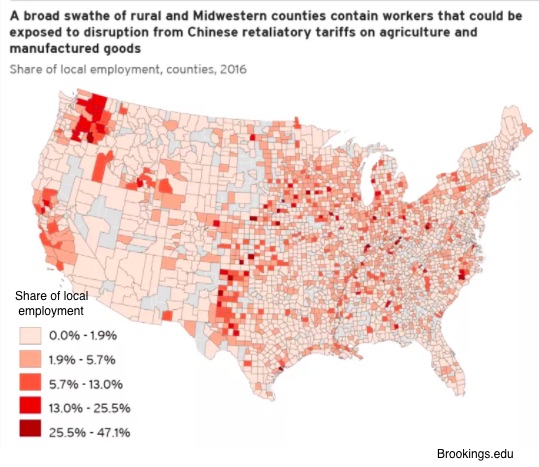 Brookings also calculated how many jobs could be impacted. Their map displayed that the West coast would be hit hard. In Washington, Boeing aircraft production, and in California, Napa Valley wine and Central Valley fruits and vegetables will feel the sting of retaliation. (Last week we looked at an Illinois hog farmer): 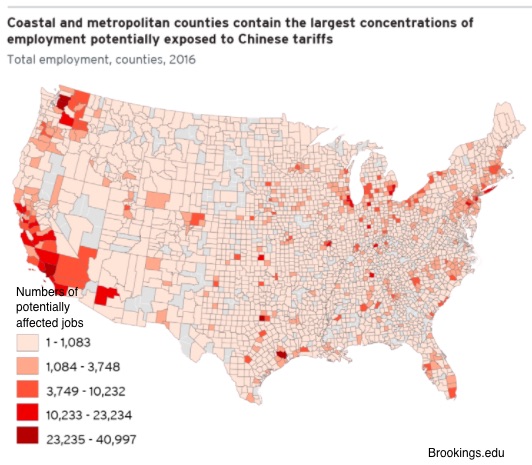 At this point we can conclude–as did Liberty Street Economics–that more jobs will be lost than created by the new tariffs.

In past posts, we’ve draw graphs that display the supply and demand impact of tariffs. Instead, today, please imagine David Ricardo (1772-1823) shouting “Stop!” from his grave.

David Ricardo was the first economic thinker to support trade with the principle of comparative advantage. Simply stated, comparative advantage tells us to produce the goods and services that require the least sacrifice. Looked at personally, it means that even if you are the best in your family at washing dishes and studying economics, you should study economics because you sacrifice too much when you wash dishes. To get the dishes done, someone who might be watching youtube can do them.

Ricardo said that when the world observes comparative advantage, trade elevates production everywhere. Seeing the proliferation of tariffs, he would surely be concerned about jobs.

My sources and more: Perfect for solid facts, the NY Fed’s Liberty Street Blog and Brookings were ideal sources for the steel and aluminum tariff impact. Then, for the anecdotal side, the NY Times had the steel pipe story and Quartz added the final touches.

More on the Mom Penalty

How Much to Regulate Marijuana