How Much to Regulate Marijuana

With marijuana legalization spreading, so too has entrepreneurial ingenuity.

In the edibles area of pot product development, wine has been a focus. According to one winemaker, the basic idea is to create a marijuana-infused wine. You just remove the alcohol, replace it with THC oil, and make it taste like sauvignon blanc.

But it’s not that easy.

At this point, I wondered whether government should care about marijuana wine. It appears that Norway had a somewhat similar idea. Trying to determine how much to regulate marijuana, the Research Council of Norway supported a study from a team of drug experts.

This is what they decided:

We can start with a scale of four possibilities.

At one end is no regulation. Use would be unfettered; you do what you want. The other extreme is total prohibition of all possession. In the middle would be decriminalization whereby pot remained illegal but the penalties would be civil. And finally we could have legal pot with limits. Lawmakers could name age minimums. Through licenses, they could oversee supply. They could say you cannot operate an auto while “under the influence of marijuana.”

Using 27 criteria, the next step was identifying the best alternative. As you might expect, big ideas like health, crime, politics and economics were on their list. So too was the cost of implementing and maintaining laws, and the revenue they could generate.

State control was the favorite. Their reasons included less user harm, protecting vulnerable populations, and more revenue. The market came in second because it lacked the health and public benefits of state control and generated less revenue. Then, in third place we had decriminalization while absolute prohibition (U.S. federal law) was a distant fourth.

Below you can see more detail: 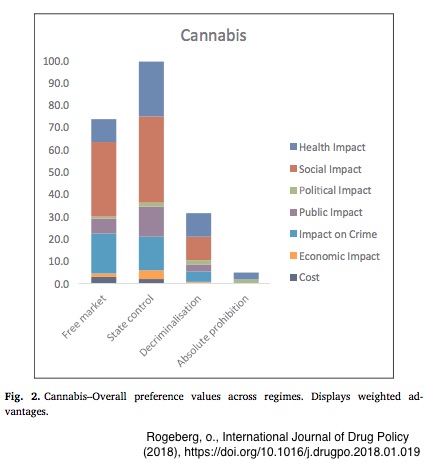 In many ways, we can call regulation an economic phenomenon. The more regulation, the less space for all of the incentives of the market. However, this study’s questions appear not to have focused on those incentives.

So, returning to where we began, if the experts want less of the market and more state control, we might not have marijuana-infused wine.

My sources and more: This Washington Post article has the perfect brief version of this paper on marijuana (that also focused on alcohol). But if you want more on the industry, I do recommend Investor’s Business Daily.

All You Need to Know About Jobs and Steel Tariffs