Will Money Make You Happy?

Until recently, the conventional wisdom said that money does not make us happy. Comparing countries, economists pointed out that Nigerians were happier than Germans and much poorer. Similarly, some economists found no connection between an increase in well-being and income while others saw a correlation up to a specific income and then none.

Now, economists have begun to change their mind.

First though we need to tweak our definition of happiness. Instead, let’s call it life satisfaction. If you just ask about happiness, then yes, there is less of an income correlation. However, once you switch to life satisfaction, a connection appears.

According to economists Betsey Stevenson and Justin Wolfers, people who live in countries with a higher per capita GDP tend to be more satisfied with their lives:

They call this a satisfaction ladder: 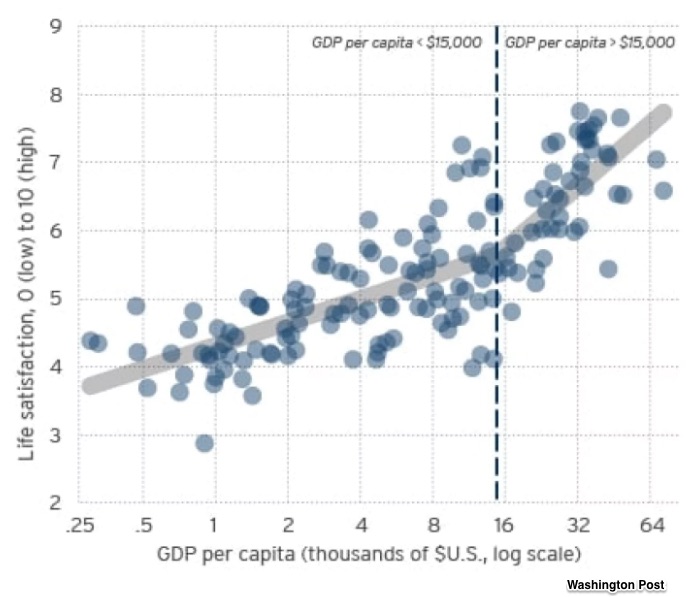 Again disagreeing with the past, Stevenson and Wolfers discovered no satiation point. Looking at poor and rich countries they found more income correlates with increasing life satisfaction. But they did point out that two Nobel laureates do not entirely agree.

In a 2010 paper, Daniel Kahneman and Angus Deaton said there appeared to be a $75,000 threshold in the U.S. At that point, emotional well-being stalled. However, life evaluation continued ascending.

And, to further complicate the picture, the results of a millionaires study was recently published. In that paper, researchers compared the self-reported well-being of people whose net worth was several million dollars and those above $8 million or $10 million. Then, the moderately wealthy millionaires had less life satisfaction than those who were extremely wealthy. But, it also depended how you made your money. The individuals who earned it themselves expressed the most well-being.

Where does this leave us?

Talking about higher per capita income inevitably involves the GDP. As the dollar value of goods and services produced in one year, the GDP has been used to measure our well being. Now we can say that using per capita data, it also correlates to our life satisfaction. But that raises other questions about income distribution…a discussion we will save for another day.

My sources and more: Thanks to the Washington Post for its thorough summary of the Wolfers/Stevenson research. But if you want to take the next step (as did I), here is a Brookings Update  and the Kahneman/Deaton paper. Then, for a third perspective, this millionaires study and a WSJ summary are possibilities.

How the Movies Became Cool