How the Movies Became Cool

The Shape of Water received 13 Oscar nominations. An August release, it couldn’t have been in theaters during the hot weather except for one reason…

Our story begins during May 1880 when New York City had a freak heat wave. With temperatures topping 90 degrees, ticket holders for the 100th performance of a play called Hazel Kirke were dreading a sweltering performance. To their surprise, the temperature indoors was 70 degrees because of a $10,000 (close to $230,000 in today’s dollars) state-of-the-art cooling apparatus. Once word of the icy air spread, crowds rushed to see the play.

The place is a Brooklyn publishing and lithography firm. Known for their high quality color printing, they were having humidity problems. On hot summer days the paper crinkled and the alignment shifted. Sometimes it was so bad that they had to shut down. Then though they hired an experimental engineer named Willis Carrier. He developed a mechanical air conditioning system and the rest is history.

Recalling the theater cooling apparatus and the impact of Carrier’s innovations on productivity, we see a hint of the monumental significance of air conditioning. Once cooling became cheaper, it spread through factories, theaters, hotels, department stores and eventually, our homes. Now we could live in Florida during the summer. 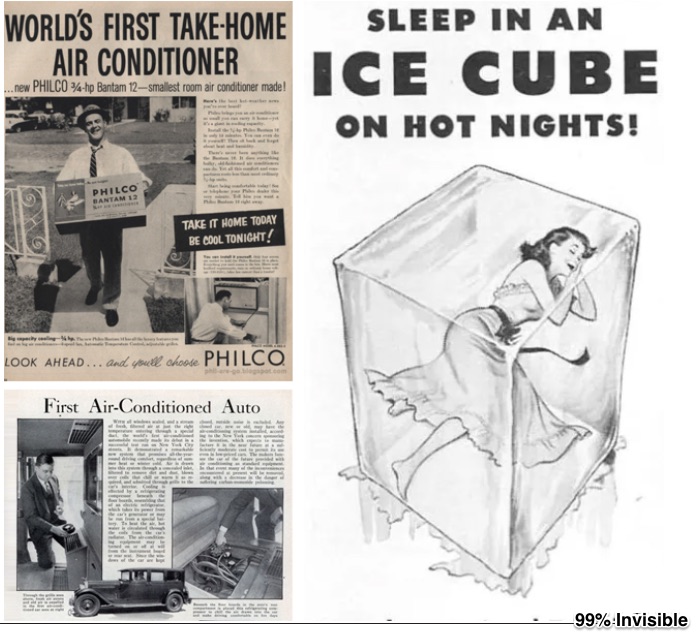 Returning to the Oscars, Jaws was the perfect summer release (in air conditioned theaters). Nominated for four Oscars, it won three–but not Best Picture. For a smile and some terror, do take a look at this excerpt. It is a classic:

Long ago Edwin Mansfield (1930-1997), a University of Pennsylvania economist, said that a seemingly small technological innovation can have a large impact through its private and social return. While he was referring to inputs like a new kind of thread, air conditioning is the perfect example. The private return might go to Carrier Air Conditioning Company of America and other early producers. But then, the ripple of a considerable social benefit unfolds when other people use the invention as a springboard for saving time, generating knowledge, and increasing productivity.

My sources and more: A 99% Invisible podcast on AC and the Oscar nominees reminded me that the two were related.

Please note that sections of this post were previously published at econlife.

The Newest Battle in the Washing Machine Trade War

Will Money Make You Happy?