Those of us with very simple tax returns would have liked ReadyReturn.

Where are we going? To governments that pre-fill in our tax forms.

In 2004 California asked close to 50,000 people if they wanted the state to do their taxes. Those lucky few would just have to approve the result, sign the forms and send them back. That’s it. Done. No hours of tax prep at home, No H&R Block visits. 11,620 said yes. 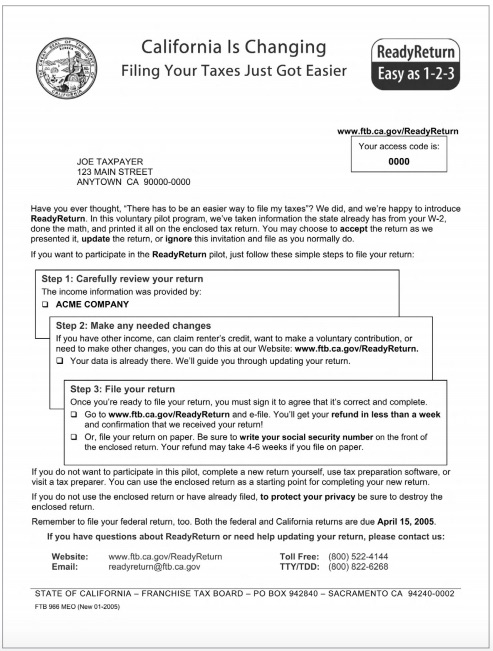 To be selected, you needed simple finances. Your income had to be exclusively from a wage, your exemption, personal, and your deduction, standard.  California knew it all anyhow. So the state entered the information and calculated what was due them. As one woman explained, “”I went online, put in my access code, sent it, printed it and I’m done,”

It was a two year pilot program. Most of the approximately 22,000  participants said they would use it again. But they never had the opportunity. The California legislature canceled the initiative.

Elsewhere though, people with simple taxes are letting government do pre-filled forms. Most claim their taxes take 5-15 minutes. Denmark started it all in 1988. Today, the list also includes Belgium, Spain, Estonia and Finland. For tax payers, simplification is the goal. Meanwhile, governments hope to reduce compliance and administrative costs.

Tax preparation could cost us 8.9 billion hours. In dollars, people could be spending $409 billion annually in fees. The numbers are huge and not really calculable. But we can be sure there is a massive transaction cost. Defined as the extra things we do to accomplish a task, the transaction cost involves the time, energy, and money we sacrifice.

I always like to use my CVS calls as the example. If I have to speak with someone to renew a prescription, I go through the same initial voicemail message. But then hitting the requisite  “3”  takes me to another voicemail message. I then hit “4,” reach the pharmacy and am placed on “hold.”

Similarly, the time and money we allocate to completing IRS forms can be filled with transaction costs. Below, you can see time estimates in a 2006 paper: 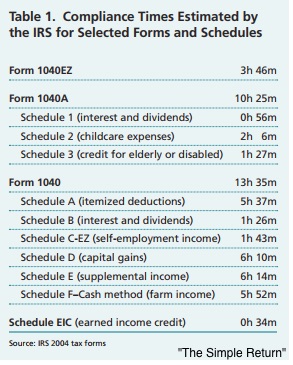 My sources and more: During yesterday’s four mile walk, I was inspired by (Vox’s) Weeds discussion of taxes. Following up on pre-filled forms, I went back to check what California had done here and here. Finally for the analysis and up-to-date facts, Quartz was good as was the OECD. But if you read just one paper, do look at Austan Goolsbee’s “The Simple Return.”