Why the Panama Canal is Bigger and Better

An expanded Panama Canal reopened during June 2016. It was two years behind schedule, $1 billion over budget, and used the steel needed for building 29 new Eiffel Towers. To accommodate the larger container ships that would head their way, New York, Charleston and Savannah are spending billions to make harbors deeper and bridges higher.

And it appears to have been worth it.

Structurally, the new locks are wider and deeper than the old ones. The size is necessary because new giant ships carrying 14,000 containers had not been able to travel through the canal.

Comparing new and old ships, you can see below why the locks had to grow: 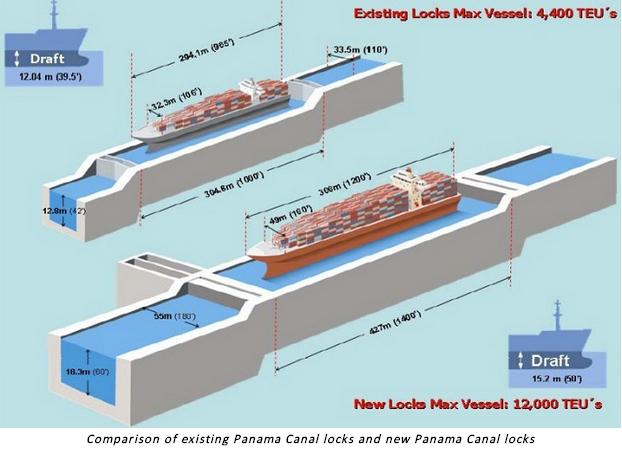 Shippers are saying it now makes sense to direct some of their larger container vessels to the Panama Canal. Traveling between between Shanghai and U.S. ports, using the Panama Canal instead of the Suez saves one week. It also became financially viable for exporters of liquified natural gas from Texas to use the Canal.

One reason for the boost is an imaginary line.

Please picture a jagged north south line dividing the US. Located somewhere between the East and West Coast, this invisible line determines where supertankers carrying Asian cargo will dock. All places to the east of the line will receive goods from NY/NJ or maybe Savannah or Charleston. On the west side of the line, maybe Los Angeles or Oakland.

But here is where it gets interesting. With the Panama Canal’s renovation completed, a newer, larger generation of Panamax container ships will be able to use it. As a result, some of the cargo going to congested West Coast ports like Los Angeles will have a cost-effective alternative. Instead of landing in LA and then traveling eastward by train, cargo can head for the East Coast and then westward inside the U.S. By choosing a new destination, shippers will nudge that jagged north south demarcation line westward from Memphis to Dallas.

Our Bottom Line: A Transportation Infrastructure

To remain a part of that infrastructure, New York, Charleston and Savannah need to dredge harbors and elevate bridges.

My sources and more: For the Canal update, WSJ  had the most recent news. Going back a year, The Washington Post added more detail.

Please note that our discussion of the imaginary line was in a previous econlife post.

An excellent movie, Captain Phillips with Tom Hanks is the story of a container ship hijacking. From what I could discover, the ship, the Maersk Alabama, is smaller than a Panamax. The ship is in the trailer for the movie, below. (Please do note that there is some violence.):

The Power of Saudi Female Drivers