When the Power of the Market Affects Commodity Prices

Close to 37 years ago, a biologist and an economist made a bet. While Paul Ehrlich predicted global ecological calamity, Julian Simon (1932-1998) said the market would come to the rescue.

Where are we going? To the tension between resource depletion and human ingenuity.

The bet involved the prices of five commodities (chromium, copper, nickel, tin and tungsten). Ehrlich believed that as overpopulation depleted the world’s resources, shortages would nudge those commodity prices skyward. Disagreeing, Simon said they would fall because high prices create the incentive to innovate and produce more. Whether we wind up with attractive substitutes or higher production, the result is a price decrease.

With the time frame the decade from 1980 to 1990, Simon won. Because during those 10 years, the price of the resource basket declined, Paul Ehrlich gave Julian Simon a check for $567.

We should note that Ehrlich did not necessarily lose.

The reason? in a statistical war, defeat depends on how you frame it. You can see below that the price did indeed drop by 1990. But had they selected 2007 as their end date, the results would have been entirely different:

But still, within any time frame, we can have the power of the market kick in. Its response will depend on the price.

Our Bottom Line: The Power of the Market

Years ago, I had the opportunity to ask former Secretary of the Treasury Lawrence Summers a question. As he walked in one direction and I in the other, I waited for our paths to cross and then said that I taught economics and wondered what he thought was the most important idea my students could learn. Barely pausing, he said, “the power of the market,” and continued onward.

Reading about the Ehrlich Simon bet,  I thought about how “the power of the market” propelled commodity prices up and down. Focusing on supply and demand, an economist could display the impact of a substitute through a change in demand.

Below, commodities A and B are substitutes. When more supply of A lowers price, there is less demand for B because people switch: 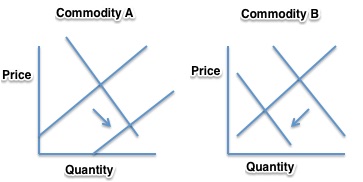 So yes, when human ingenuity increases the supply of one commodity, the power of the market could diminish resource depletion of an alternative.

My sources and more: Thanks to marginal revolution for alerting me to an interactive web site for graphing commodities prices. If you are curious about items than range from beef to Cameroon logs to natural gas, do take a look. For more on the bet, here Slate tells the story.

Please note that sections of today’s blog were published in a previous econlife post.

How College Athletes Are Really Paid

Why Gender Word Barriers Could Be Worse Than Sticks and Stones