Q: Where do Pecorino Cheese, whiskey and whipped cream lose the same battle?

A: In trade wars.

Our first story starts with bananas and ends with cheese. Because Great Britain, France and Spain wanted to favor their former colonies, they imported bananas from ACP (African, Caribbean, Pacific) countries. That meant much less business for companies like Chiquita that had plantations in Central America.

Making a very long story much shorter, we can just say that Chiquita encouraged the U.S. government to pressure the Europeans during the 1990s. One result was a U.S. retaliatory tariff on Italian Pecorino cheese. Although the tariff targeted Italian Pecorino makers, it also harmed U.S. consumers. Quantifying the impact, researchers estimated that cheesemakers would lose $8 million annually and U.S. consumers, close to $5 million.

You can see the plunge in U.S. Pecorino cheese imports: 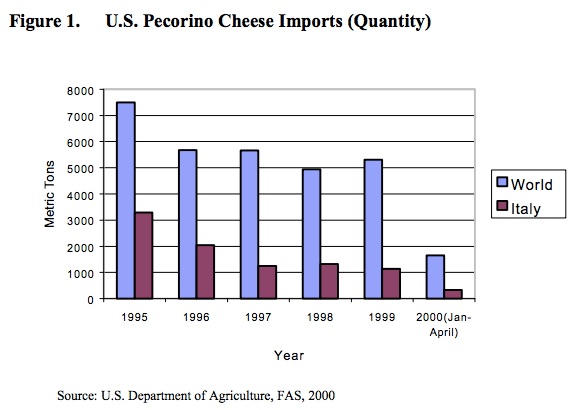 Fast forwarding to now, a Trump steel tariff would have the makers of Jack Daniels concerned. With more than half of their output leaving the country, Southern Whiskey and bourbon producers are as vulnerable as the Pecorino people. In addition, the distilled spirits industry would have benefited from TPP lower tariffs and name protection (like Champagne enjoys) from trade deals.

For whipped cream, a Trump steel tariff would elevate production costs. Moving through the Pacific and the Panama Canal, Japanese steel eventually winds up in Illinois where it becomes a can. If a Trump tariff elevates the price of steel, then ice cream sundaes with whipped cream will cost us more.

When we trade a tariff for domestic jobs, the cost of the tradeoff can be invisible.

So very charmingly, below, Nobel laureate Milton Friedman explains that tariffs can appear attractive because the job numbers they boost are visible while the costs to consumers and exporters are invisible. Do watch the full six minutes. Dr. Friedman presents a wonderful banana example at the end.

So yes, trade wars are unpredictable. But we can say for sure that making and buying cheese, whiskey, and whipped cream will become more expensive.

My sources and more: A NY Times Op-Ed on whiskey and bourbon touched many topics. Relating to banana trade wars, Pecorino cheese, and whipped cream cans, it was really about the downside of tariffs.

Not Quite a Goldilocks Recovery

Why There Are So Few Female CEOs