Asked why, Pew Research got these answers: 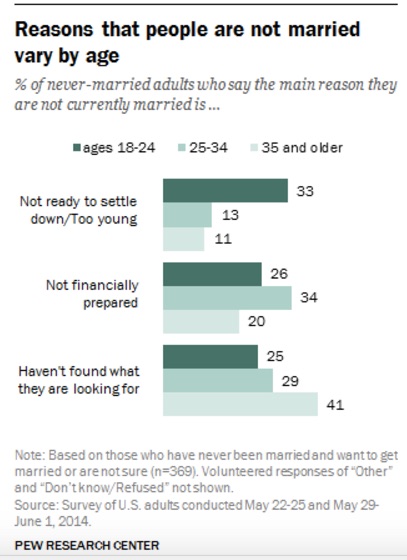 Some economists, though, have slightly different reasons.

Why Certain Men Are Not Getting Married

In a recently published paper, researchers observed that the decline in manufacturing jobs relates to marriage rates. Asking why, they concluded that the men became less attractive and less available. In those manufacturing jobs, men earned more than women. However, that earnings advantage evaporated when they lost their jobs. And then, through less appealing behaviors, their desirability further shrunk. Drug and alcohol use rose as did incarceration and homelessness. Add to that the men that left in search of new opportunities and we wind up with a lower population of marriageable men.

This takes us to supply and demand.

Our supply curve shifts because of fewer “marriageable” men in manufacturing communities. Meanwhile, on the demand side, woman want fewer men. The result? Supply and demand meet at a higher equilibrium price and lower quantity. Defining cost as sacrifice, marriage has become too “expensive” for more people.

Nobel economics prize winner, Gary Becker (1930-2014) told us that marriage is not entirely about love. Instead think utility functions. People marry because they expect to “raise their utility level above what it would be were they to remain single.” Defining utility as welfare, economists would say that the utility of marriage in communities hit by “trade shock” has decreased.

My sources and more: The connection between manufacturing jobs and marriage became fascinatingly evident in this paper. It made me wonder about the traditional reasons for not tying the knot in the Pew results.

Throwback Thursday: Before the Baguette Crisis