Today’s #TBT will return us to the days when malls were about more than shopping.

Where Have All the Malls Gone?

A mall typically dies a slow death. Little by little traffic decreases. Some stores leave and none replace them. The departure of the anchor store can be the big blow. But the biggest hit came from the great recession.

So yes, we have new shoppers, old malls and a seismic shift in retailing. Still though, BusinessInsider does not predict that all malls will go–just the less affluent ones: 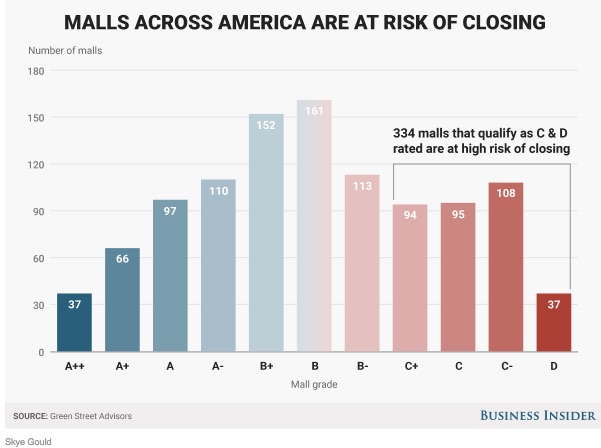 When the Mall Was a New Idea

More than a place to shop, the mall was where we gathered. At the mall on a Saturday, we could feel a sense of community–just what an Austrian immigrant had in mind.

Disguised as a storm trooper, Victor Gruen escaped from Nazi Europe in 1938 on a flight from Vienna to Zurich. Fast forwarding to the 1950s, we find him in the U.S. convincing developers that there was a new way to shop. Victor Gruen imagined a community–a space that pulled us together. It had two stories, maybe 50 or 100 stores under one roof with a controlled climate–AC in summer and heat in the winter. Gruen’s most famous mall (and one of the first) was Southdale in Edina, Minnesota.

Do take a look at Gruen’s shopping mall (below). You will see why he has been called the most influential architect of the 20th century:

With Gruen having created the mall concept, a mall developer named A. Alfred Taubman took the next step. Thinking at the margin, Taubman used every extra design detail to nudge the shopper around the mall.

Taubman told Malcolm Gladwell that a mall’s shopping corridor should max at the equivalent of three city blocks–maybe 1000 feet– the farthest a typical shopper will walk. He cared about “adjacencies”–that is stores that complement each other. If you have a clothing establishment, then place a shoe store nearby. As for restaurants, busy at lunchtime, they empty and become dead space so their location has to be peripheral. Even the slope of the property mattered so more parking could be near second floor stores. Shoppers, he explained, are like water, They flow downward more easily. And the lights have to obscure the setting sun so people feel no inclination to go home.

Culminating with the Mall of America’s 12,000 parking spaces, 520 stores, and 50 restaurants, the mall was an American way of life…

…that we can nostalgically remember.

My sources and more: Three sources combined to create a complete mall history. The best was from Malcolm Gladwell in The New Yorker. But add to that the 270+ page Mall Maker and a Smithsonian article and you can learn more about the mall than you could ever want to know. And finally, Business Insider had the 2017 update.

Getting Order From Wild Blueberries

The Mystery of the Costly Crustacean