At its peak during the summer months, the population of Meyers Chuck, Alaska is close to 25. But still, their mail arrives weekly on a 1958 de Havilland Beaver. No roads, no cars, no school, but the island does have a post office.

After sorting the mail, Cassy Peavy (the Meyers Chuck postmistress), signals it is ready by hanging the American flag outside her door. Seeds, a generator, the fishing newsletter called The Spawning News all might arrive. Seeming not to care if “you’ve got mail,” the townsfolk congregate at the post office to snack on Cassy’s cookies and schmooze. Now 79 years old, Cassy’s husband built the post office. Their zip code is 99903.

You can guess where we are going. With the USPS (U.S. Postal Service) in dire financial difficulty, should Meyers Chuck get mail?

In its FY 2016 Results, the USPS reported a net loss of $5.6 billion that was mostly because of mandated retirement benefits. The bright spot was double digit growth for shipping and packages.

But still, they are coping with less mail: 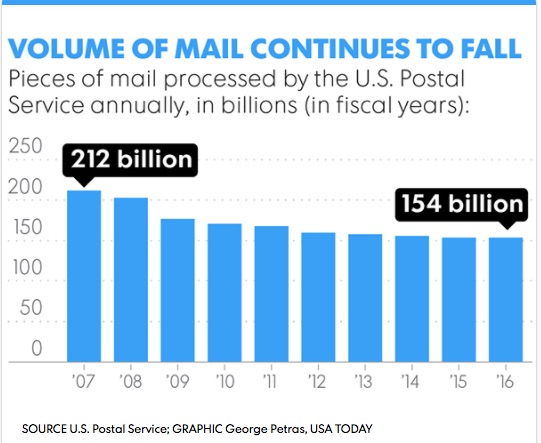 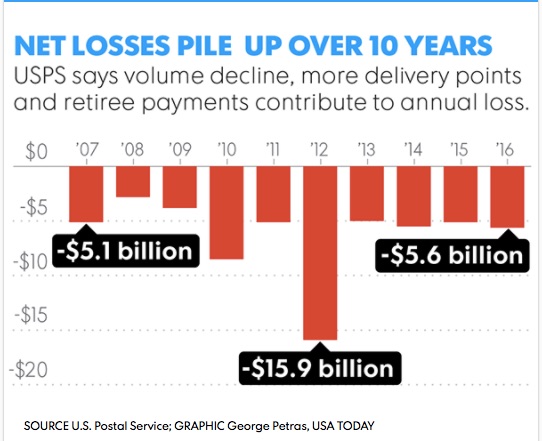 In his 2018 budget proposal the President outlines cuts in USPS retirement benefits and deliveries.

Somewhat similarly, we have the Congress considering the Postal Service Reform Act of 2017. If passed, the act would change benefit obligations, increase stamp prices, and establish new criteria for cheaper mail delivery to businesses. Also, they lay out the criteria for closing a post office like the proximity of the nearest alternative.

And that returns us to Meyers Chuck. The nearest alternative is 11 miles away and inaccessible during parts of the winter.

Do we owe them mail delivery?

Our Bottom Line: Equality or Efficiency

The USPS dilemma reminds me of Arthur Okun’s Equality and Efficiency.

Always, we have demonstrated a tension between our democratic heritage and our economic aspirations. With postal service, our democratic heritage dictates delivery for everyone, everywhere, no matter what the expense. However, our economic aspirations take us to efficiencies that optimize how government uses land, labor and capital. They would diminish cost and also what government universally provides.

In many ways, whether Meyers Chuck gets mail is a philosophical decision about the role of the U.S. government.

My sources and more: Thanks to an NPR report for introducing me to Meyers Chuck, Alaska and to Bloomberg for inspiring my title. For more on Alaska’s planes I suggest you go here. But for the best on the USPS’s difficulties, do look at USA Today and the Washington Post. Finally, the primary source for all of it is the Congress’s summary of its proposed legislation and the USPS FY 2016 fiscal year report. Also, you might want to see The Spawning News.