In northwestern China, a Kazakh herder says a 17.8 ton meteorite belongs to him. The local government disagrees.

Made of siderite (iron carbonate), the rock could be worth millions. Others say just $30,000: 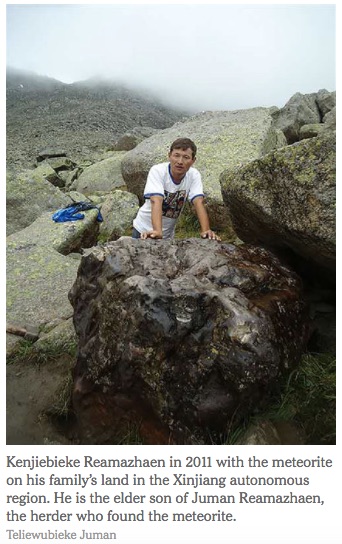 The NY Times tells us that one Chinese legal clause will determine who owns the Kazakh meteorite. Saying natural resources like wetlands belong to the government, the clause ends with “et cetera.” Local authorities claim that “et cetera” includes meteorites. Disagreeing, the herder says the meteorite that sat on his property is not a natural resource.

A Chinese court will probably decide during the next six months.

In 1976, prospectors looking for a lost gold mine on federal land in California found the Old Woman meteorite. When they claimed “her,” the court said no. Based on the 1906 Antiquities Act, she belonged to the federal government.

This is the Old Woman: 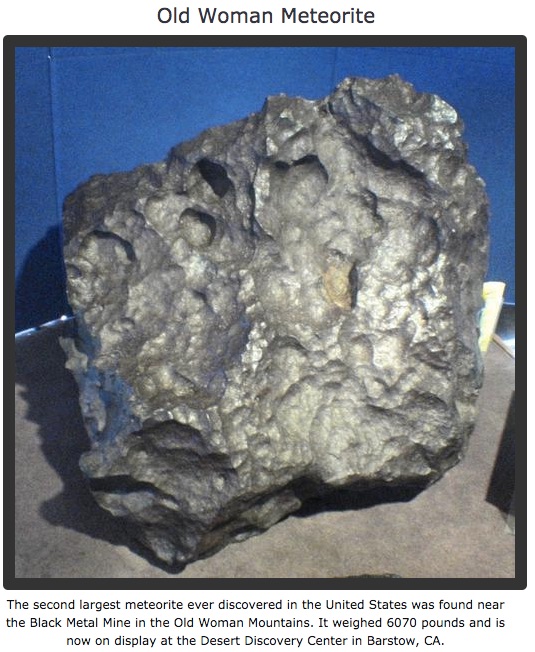 Similarly,  a private property owner owns a meteorite that lands there. The precedent was established in an 1892 case when a person found a meteorite on someone else’s land and sold it. Saying the finder was not the lawful owner, the court nullified its sale.

Whether referring to a meteorite or a bond, the right to property needs to be preserved in a market economy.

In 17th century New England, the process unfolded gradually. Many of the settlers had come from English manors where the land and tools were communally owned. In towns like Sudbury, MA, at first they too shared their land and tools. Soon though, with people moving westward and claiming their own land, private ownership prevailed.

By the end of the 18th century, we have Alexander Hamilton defending the sanctity of contracts. He knew that the success of capitalism depended on respecting individual property rights

My sources and more: This NY Times article is a reminder of the importance of contracts in a market economy. For the facts on U.S. meteorite ownership, this website is fascinating.

Debating the Success of U.S. Healthcare

Where Cash (sort of) Rules