The Downside of a Greek Bailout

Last December, journalists received an Ebenezer Scrooge Christmas e-card from the Greek Finance Ministry. The dismal image of Scrooge was a “dig” at the austerity mandated by unpopular lenders: 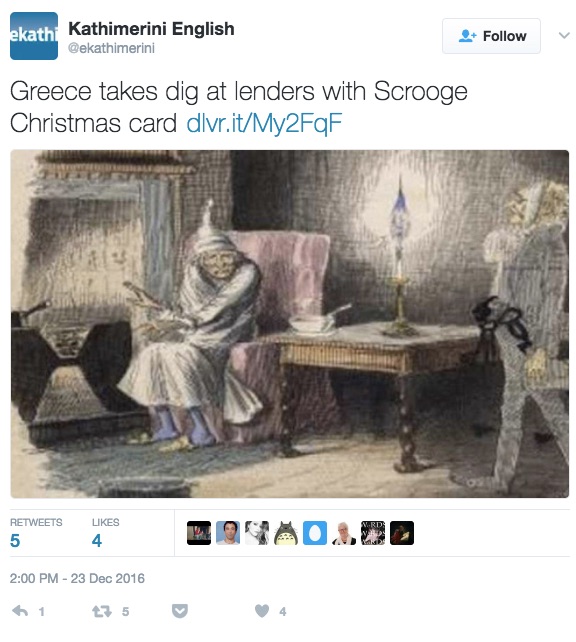 Where are we going? To Greek bailout problems.

With new austerity measures having just kicked in, Greek taxes are up and pensions are down. Their attempt at fiscal discipline is not new. It was the downside of receiving a bailout for borrowed money they could not possibly pay back.

According to the NY Times, businesses are responding by closing. But not really. As one accountant explained, they are just moving underground. When a business enters the underground economy, it officially disappears. No longer paying taxes or observing regulations, underground businesses use cash or barter.

Because businesses in this shadow economy have lower expenses, they can charge less. You can see what starts to happen. More firms are drawn into the shadows by those who are there.

The result? Greece has a large underground economy:

Defined as the Greek government’s spending, taxing and borrowing, their fiscal policy has been catastrophic in all three areas. Through publicly owned money-losing enterprises and generous pensions, they overspent. Unable to cover their obligations with tax revenue, they borrowed gargantuan sums. Unable to pay the money back, they avoided a massive default through a bailout plan that began in 2010.

Now, the bailout is again in the news because Greece needs new money to cover a July bond payment:

The response from the IMF is more Greek austerity. And that takes us back to a Scrooge Christmas card and the underground economy.

My sources and more: The headlines have returned to Greece. WSJ and FT tell us more about the bailout while the NY Times  emphasizes Greek taxes and pensions. What I most enjoyed though was the analysis in this paper and the Greek perspective here and here.

The Revenge of the Smartphone