In a December 2016 report, the CBO (Congressional Budget Office) presented budget balancing whats and whys. Focusing on the 60% of the budget that is mandatory spending, they include 26 suggestions. In that list, the really big savings (excluding health-related programs) come from:

From the remaining 40% of the budget for discretionary programs, the largest items in a list of 28 cuts are:

Health-related spending includes mandatory outlays, subsidies from federal tax cuts, and discretionary health expenditures. From a list of 18 options, the most substantial CBO suggested cuts are:

So, to decide whether our borrowing is affordable, we need to compare it to the GDP. After all, borrowing $1 million for a mortgage is irresponsible if you earn $75,000 a year. However, if your annual income is $10 million, then the loan is quite manageable.

Similarly, we can judge the size of our debt through the value of the goods and services we produce–our GDP. Somewhat like a mortgage, when you borrow too much, you have to allocate too many of your resources to interest payments. As for emergencies, a massive mortgage could prevent you from responding.

During the past 50 years, the debt to GDP ratio has averaged 39%. Now it has climbed beyond to (what some say are) risky highs equaled only during wartime: 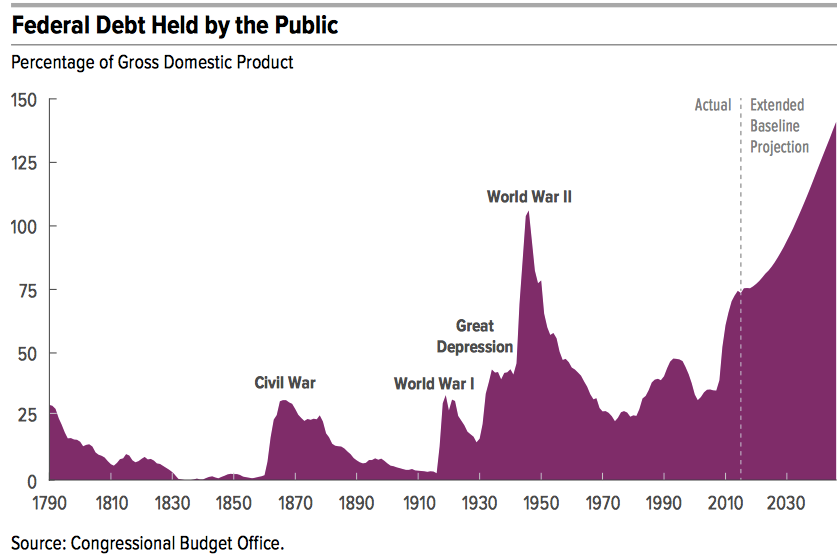 You can see why our politicians really like the waste and fraud choice for reducing the deficit.

(Next week we will consider the revenue half of the budget. We also might look at more specific spending cuts in our mandatory and discretionary categories.)

My sources and more: Always interesting, James Surowiecki’s New Yorker columns included this discussion of the federal budget. Combining the New Yorker column with a 316 page 2016 CBO Report, we can see how the budget picture is pretty dismal.

An Artist Who Made Money