Some Sweet (Drink) News From Government

New federal dietary guidelines suggest we consume less sugar. Issued every five years, the new report said added sugars should total no more than 10% of our daily calories. So, if you drink a can of soda, its 40 grams of sugar mean you have only 10 left for the entire day.

Where are we going? To sugary drink nudges.

The Sugar in Our Diet

In another new government report, the USDA looked at a typical household food basket. Since one goal was to see how much food stamp households spent on sugary drinks, they categorized their data as SNAP (Supplemental Nutrition Assistance Program) and non-SNAP participants. Their data covered transactions at one grocery chain by an average of 26.5 million SNAP and non-SNAP households during 2011.  A purchase was classified as SNAP if food stamps paid for at least half of it.

The results for SNAP and non-SNAP households indicate 20% of our supermarket food basket spending is for sugary foods: 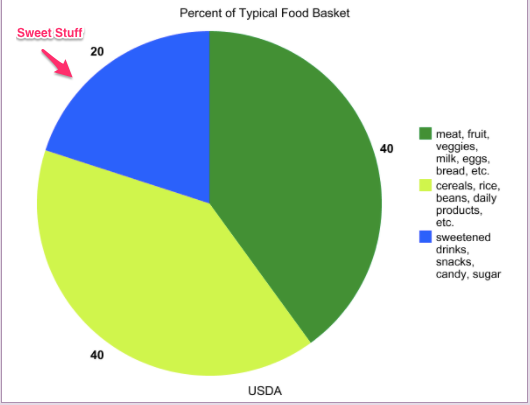 The one item on which more money was spent than any other was soft drinks with SNAP households spending 5% and non-SNAP 4% of their grocery dollars. Rather than 10% of our daily calories, our sugary consumption is closer to 14%.

Health professionals warn us that our sugar intake is fueling the increase in diabetes and obesity.

As economists, the statistics lead us to several regulatory “nudge” issues. An idea publicized by law professor Cass Sunstein and economist Richard Thaler, the nudge is an incentive that can shape our behavior. Now, the U.S. and the U.K. even have nudge units that help formulate public policy.

So, thinking of public policy, we can ask if any of the $71 billion in tax dollars allocated to nutrition assistance (2011) should be used for sugary drinks. Right now, there are no sugary drink limitations.

We can also revisit the soda tax debate and ask how much of a nudge. Do we want a tax so high that few people buy soda? Or do we want it low enough to generate money for the 7 municipalities (below) that now levy the tax?

Whatever we decide, we can remember that sugary drinks take us to government’s dollars, cents and guidelines whenever we discuss if we owe each other a healthy nudge.

My sources and more: With the multiplication of sugary drink taxes, sugar has been in the news. The NY Times had this Opinion column during September and published new dietary guidelines several weeks ago. Now though, the focus has turned to food stamp recipients and all other households in this USDA report.

The Hidden Part of Our Paycheck